The recent slowdown in the stock market may raise the demand for “safe haven” and stable stocks including Utilities stocks that tend to offer high dividend yields and are generally less volatile than other stocks. Is it time to reconsider investing in utility companies such as Integrys Energy Group (NYSE:TEG) and FirstEnergy (NYSE: FE)? Let’s examine the latest developments in the electric market and determine what’s up ahead for this industry.

Electricity prices are increasing – will this trend continue?

The chart below shows the developments in electricity prices in the past several years. 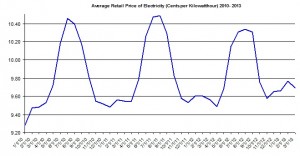 Let’s turn to several Utilities companies and see if they have done better or worst than the industry’s average.

Are utilities stocks still worth having? 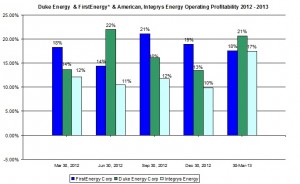 Duke Energy’s net sales also sharply pulled up by 62.5% in the first quarter. Most of the rise in revenues is also due to the sharp gain in heating degrees, which according to the company’s quarterly report, rose by 35% to 49% depending on Duke’s subsidiaries.

Thus, FirstEnergy hasn’t augmented its revenues in the first quarter of 2013; Duke and Integrys had a sharp increase in revenues, partly related to the demand for natural gas (for  Integrys). Looking forward will these companies continue to see such a sharp rise in revenues? In order to answer this question let’s turn to the estimated future developments in the electricity market including price and consumption for the rest of 2013.

The recent rise in profit margin may have been partly driven by the rise in electric prices in the first quarter of 2013 compared to the same time in 2012. But the EIA projects the demand for electricity will dwindle in this summer compared to last year’s summer, which was hotter than normal. This means, in the coming months, the price of electricity will be lower compared to 2012. Nonetheless, the EIA estimates total consumption in the U.S is expected to rise by 1.3% in 2013 (year-over-year) on account of 0.4% gain in consumption and 0.7% population growth.

The price of electricity is projected to rise by 1.1% in 2013 compared to 2012. Therefore, revenues of an average company will roughly rise by 2.4% in 2013. This benchmark is something worth remembering for evaluating the above mentioned companies in the coming quarters.

Nonetheless, since the EIA project last year’s hotter than normal summer won’t repeat this year; this will bring down not only electricity prices but also consumption in the coming months (compared to last year). Therefore, we might see a drop in revenues growth of the above-mentioned companies. Duke and Integrys, unlike FirstEnergy, recorded sharp gain in the first quarter of 2013; thus, they are likely to finish 2013 with an increase in revenues compared to 2012, even if revenues will be lower in the coming quarters compared to last year.

Major utility companies might see a drop in revenues in the coming months but overall 2013 is likely to be better than 2012 especially for Integrys and Duke. The steady growth in revenues along with high dividend yields is likely to keep these companies a compelling investment.