In recent years, utility companies have been facing high capital expenditures in order to comply with the Environmental Protection Agency’s Mercury and Air Toxics Standards. The rising environmental costs alone are pushing leading utility companies to cut down on usage of coal in exchange for natural gas and renewable resources. FirstEnergy has recently announced the shutdown of two coal based plants, which were responsible for 30% of the company’s $925 million Environmental act fine – nearly $280 million. Despite these changes, FirstEnergy still heavily relies on coal: 60% of its electricity is generated with coal. Natural gas generates only 7%.

American Electric Power, even more than FirstEnergy, relies on coal for 71% of its power generation; natural gas accounts for 17% out of the total fuel usage. Due to the environmental considerations American Electric Power plans to invest between $3.4 billion and $4.2 billion by 2020 in its plants to comply with the environmental requirements. Moreover, the American Electric Power has ten plants, which generate a total of 5,233 MWs or nearly 14% of its total generation capacity that it plans to retire by 2016. The company has four plants that generate a total of 4,050 MWs that the management [l1] is in the process of obtaining permits for either converting these plants from coal units to natural gas or installing emission control equipment. But for now, the regulatory approval is still being evaluated by the company’s management.

If these companies switch from coal to natural gas, they may face a couple of issues that could adversely affect their market value: The shift towards natural gas, a highly volatile commodity compared to coal, could increase the risk associated with utilities companies. Higher volatility could result in bigger fluctuations in the profit margins of these companies.

The second issue is the higher cost of generating electricity; according to the U.S Energy Information Administration, the total cost of operating and maintaining a natural gas fired power planet is more expensive than with coal, which will result in thinner profit margins.

In the near future, besides the shift from coal to natural gas, the developments in the electric sector could also determine these companies’ stock prices. Let’s see what’s next for the electric sector and how this could affect the revenues of leading utility companies.

Is the electric sector powering up?

Based on the latest Energy Information Administration update, electricity prices rose in the past several months: Between April and July the price increased by 11%. Moreover, the average price of electricity in 2013 (year-to-date) is roughly 2.1% higher than last year’s price.

The chart below shows the developments in electricity prices in the past several years. 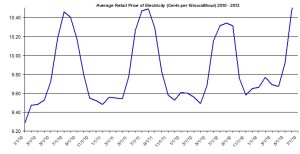 The above-mentioned general market upward trend in the electric market has also reflected in some in the performance of several utility companies: In the second quarter, revenues of American Electric Power inched up by 0.9%. Northeast Utilities System (NYSE:NU) also augmented its revenues by a small margin – a 0.4% growth in net sales (year-over-year). Conversely, FirstEnergy recorded a 6.3% drop in revenues in the second quarter of 2013. For one reason, the drop in FirstEnergy’s revenues is related to the softer demand for electricity in the commercial and industrial sectors.

After controlling for FirstEnergy’s one time expenses related to the deactivation of the two plants, both FirstEnergy and American Electric Power’s profit margins remained stable, while Northeast Utilities System’s profitability sharply rose in the second quarter.

The chart below shows the developments in the profit margins of all three companies in recent quarters. 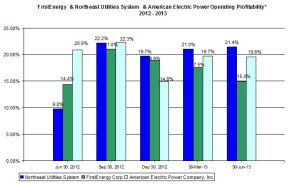 The chart also reveals that FirstEnergy lags behind other utility companies not only in growth in revenues but also in profit margins. Up to now, this lower profitability hasn’t reflected in FirstEnergy’s dividend yield, which is currently 5.84%. In comparison, Northeast Utilities System’s dividend yield is 3.52% and American Electric Power’s annual yield is 4.43%. The dividend payments could be slashed if these companies’ profit margin declines.

Most of Northeast Utilities’ revenue comes from the electric segment, which accounts for 71% of its total revenue. One of the reasons for the rise in Northeast Utilities System’s profit margin is the rise in price of natural gas. The company’s natural-gas distribution accounted for 14% of its revenue, but it is the second most profitable segment with a profit margin of 17%.

The shift of many utility companies from coal to natural gas could increase their risk profile and reduce their market value in the coming years. In the meantime, the rise in electricity prices could benefit leading utility companies as this could further augment their revenues and widen their profitability. Finally, even though utilities have under-performed in the stock market, their high dividend yield keeps them a solid investment.