Shares of BP plc (NYSE:BP) resumed their downward trend in recent weeks. One of the reasons for company’s decline may have been related to the tumble in the price of oil. But the main issue continues to be the lawsuits BP faces and its future performance. The uncertainty around the company’s future may keep pulling down its stock. But is it worth owning this company’s stock? Let’s review this issue in greater detail. 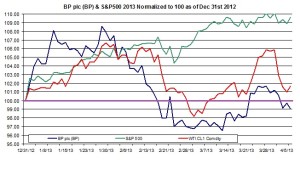 Is BP Out of the Deep-end?

By the end of 2012, BP was able to allocate $42.2 billion towards funding the cost and fines of the 2010 oil spill. But BP isn’t out of the deep-end just yet. More than 160,000 claims were submitted under the Deepwater Horizon Economic and Property Damages Settlement. So if the company will be able to settle these claims, pay its fines, clean and restore the Gulf of Mexico spill within the amount it set aside, then the company’s uncertainty will diminish. The State lawsuit (Louisiana and Alabama) is still pending and is posing the biggest threat for the company. This lawsuit is likely to keep BP’s stock from rising as it will continue to pose a threat that BP will need to sell more assets or cut its dividend in the future. In the meantime, BP is slowly growing ( revenues) and its high dividend yield is making this company an interesting investment.

Due to the company’s stock tumble, the annual dividend yield of BP continues to lead the way among oil and gas producers: BP’s annual dividend payment of $2.16 per share, which comes to an estimated annual yield of 4.95%. In comparison, Exxon Mobil (NYSE:XOM) pays an annual is dividend of $2.28 per share, which comes to 2.6%; Chevron (NYSE:CVX) pays a yearly dividend of $3.60 per share – a 3.1% yearly yield. Moreover, the payout ratio of BP is one the highest for the industry: BP’s payout ratio reached in 2012 55%. Exxon’s payout ratio was only 22.5% and Chevron’s ratio was 26.5%. This means, BP investors not only receive a high yield, they also receive a high share of BP’s profit.

BP is also planning to buyback $8 billion of its shares, following the company’s sale of its 50% share in TNK-BP to Rosneft.  This step will put BP in the same path as Exxon and Chevron. Both Exxon and Chevron have been buying back their stocks in recent years: in 2012 Exxon purchased nearly $20.8 billion of its stocks back. Chevron bought $4.1 billion. So BP is paying back its investors via high dividend and buyback program. But will BP’s revenues continue to grow? One of the factors that will determine it is the direction of oil prices.

In recent weeks the price of oil took a hit and declined: During April the crude oil price fell by 4%. This decline didn’t seem to be related to a reaction to a fundamental change in the oil market. The decline in the price of oil may have adversely affected the future value of oil producers and thus (using DCF) pulled down the stock prices of oil producers. The price of oil has a mid-strong linear correlation with BP’s stock. Despite the recent fall in the price of oil, the quarterly average price of oil for the first quarter of 2013 was 7% higher than the previous quarter but 8% lower than the average quarterly average during the same quarter in 2012. This could affect the company’s profit margin in the first quarter of 2013. 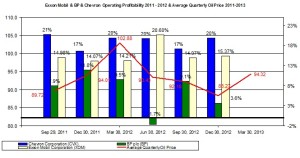 Considering the rise in the quarterly average price of oil, the profit margin of these oil companies might slightly rise in the first quarter of 2013. In such a case, these companies’ stocks may rally in the coming weeks.

I think BP isn’t getting enough credit for its recovery and the uncertainty around its future is less significant than the market estimates. Considering the recent steps the company implemented and the high dividend yield it offers, the company should be considered an interesting investment opportunity.

← Gold and Silver Prices – Daily Outlook for April 10
Will These Gold Producers Bounce Back? →