The spike in the price of gold between 2008 and 2011 seems to have taken a turn in the past year and a half and slowed down. In 2012 the price of gold rose by only 3.7%. Many investors still have gold or gold equivalent investments including gold royalties companies such as Royal Gold, gold producers such as Barrick Gold Corporation (NYSE: ABX), or gold ETF such as SPDR Gold Shares (NYSEMKT: GLD). These investments are deemed by many as safe haven investment to protect against the devaluation of the USD or an alternative to other safe haven investments such as long term treasuries securities. Will gold resume its rally in the near future? Let’s examine this issue in greater detail.

It’s implied that if the price of gold will remain flat in the near future, then other investments related to gold will also remain unchanged. During 2012, gold producers’ stocks haven’t performed well: Barrick’s stock fell by 26.3%; Goldcorp Inc. (NYSE: GG) stock, by 19.3%. These companies have paid dividends that currently represent an annual yield of nearly 2.4% and 1.55%, respectively. Thus, even with the dividend yields these stocks have tumbled down in 2012. On the other hand, the gold royalty company Royal Gold has out-performed gold price in 2012: shares of the company rose by 17% and the company paid a dividend with an annual yield of 1%. In comparison, the price of gold rose by only 3.7% and SPDR Gold Shares by 3.9%.

Will gold resume its rally in the near future?

Two competing theories have tried to explain the spike in gold prices in recent years: the first, the expectations/speculations that the USD will depreciate (via a rise in inflation or via the depreciation against other leading currencies) have lead to a sharp rise in the demand for gold as a safe haven investment. The second suggested by Paul Krugman that the plunge in long term interest rates led to a short term rise in gold prices, because investors require less motivation for a price appreciation to hoard gold.

I don’t think it matters which theory is able to better explain the rise in gold prices, because both imply that if the financial markets will stabilize, if USD won’t depreciate and if the long term rates will rise, then gold price won’t appreciate.  Let’s examine what could drive gold price higher.

The FOMC and Gold

One of main driving forces for the price of gold to rise in recent years (based on the first theory) is the expectations for the USD to devalue. In the past year, however, the USD remained stable (compared to other leading currencies and inflation) despite the FOMC deciding to keep its short term interest rate low until 2015, launching QE3 back in September 2012 and then expanding QE3 by purchasing $45 billion of long term treasuries each month. These decisions seem to have had a diminishing effect (compared to QE1 and QE2) on the U.S money base and gold prices, as indicated in the chart below. 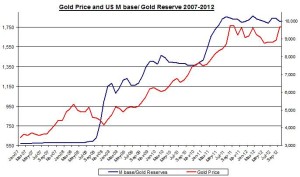 The minutes of the latest FOMC meeting raised the speculations that the Fed might conclude its asset purchase program in 2013. This will further lower the possibility of a spike in the price of gold via the expansion of the money base. The next FOMC meeting to be held at the end of January might shed some light on this issue. Moreover, the Fed might also refer to the recent decision of U.S policymakers to raise taxes on wealthy households and the fiscal issues that remained open (raising the debt ceiling and spending cuts). If the actions done by the U.S government will lead to an economic slowdown or raise the risk attributed to the U.S economy, then this could help rally the price of gold. Are there any other factors that could help rally the price of gold?

Another factor that some analysts think will help drive gold prices is the implementations of Basel III that will lead banks to acquire gold to support their capital requirements. In this regards I’m a bit skeptic because: For one thing the full implementation of Basel III will only start in January 2019. Second, Basel III moves gold from tier 3 to tier 1 so banks’ current gold reserves will be more “valuable” for their capital requirements. So this won’t necessarily increase the demand for gold just make better use of the current gold banks already have. Third, unless forex reserves will lose their value with respect to gold so that banks will want to hold more gold as a reliable capital, then this new Basel III plan won’t raise the demand for gold.

It’s still uncertain if the big gold rally is behind us. The poor performance of gold in 2012 despite the decline in long term bong yields, and the monetary expansion programs implemented by the FOMC, raises the possibility that gold isn’t going anywhere. In such a case, other related investments including gold producers, ETFs and royalty companies will be adversely affected by such an event.