The gap between the NG future and spot prices – future minus spot – was mostly in Backwardation during last week.

The following charts present the developments in Nat-gas future (Nymex Henry Hub) in $/mmbtu during December 23-27. 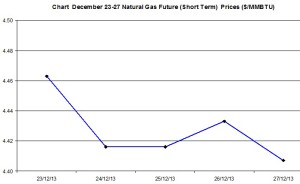 As you can see in the chart above, the natural gas price (Henry Hub future rate) fell mainly on Tuesday and Friday. 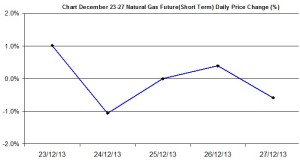 The current outlooks are that the temperatures will sharply fall to below normal levels throughout the U.S mainly in the North. Considering the expected low temperatures for the season; the demand for natural gas in the residential/commercial sector throughout the U.S. is likely to rise in the near future. Finally, the heating degrees days are estimated to be lower than normal and last year’s. These factors could pull back down the price of natural gas.