The price of natural gas rose again during the first half f the week and passed at one point the $5.5 mark – the highest level since January 2010 – only to tumble down in the last two days of the week. The average weekly price was also 15.7% higher than last week. In the latest EIA report, the natural gas storage fell by 230 Bcf. Last week’s extraction was much higher than last year’s and the five year average rate. The current high volatility of the price of natural gas is likely to continue until the U.S weather stops playing a significant role on the fluctuations in the demand for natural gas.

The Nymex Henry Hub Future (short term delivery) declined by 4.6% and reached by Friday $4.94/mmbtu; its average daily change was -0.68%; its weekly average rate was 8.7% above last week’s average price.

The difference between the NG future and spot prices – future minus spot – was mostly in Backwardation during last week.

The following charts present the developments in Nat-gas future (Nymex Henry Hub) in $/mmbtu during January 27-31. 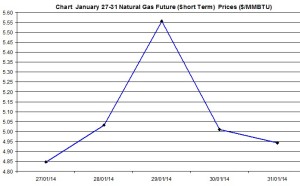 As you can see from the chart above, the natural gas price (Henry Hub future rate) jumped mainly at the beginning of the week only to plummet at the end. 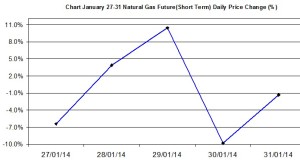