The price of natural gas spiked on Thursday and passed the $4 mark, following the drop in storage. According to the recent weekly EIA update, the storage extraction was 162Bcf. This week’s extraction was much higher than the five year average and last year’s rate. The recent upward trend of natural gas might slowdown due to the changes in weather throughout the US.

The Nymex Henry Hub Future (short term delivery) sharply increased again by 4.05% and reached by Friday $4.11/mmbtu – its highest price since May 2013; its average daily change was 0.81%; its weekly average rate was 4.23% above last week’s average rate.

The difference between the NG future and spot prices – future minus spot – remained mostly in Contango during last week.

The following charts show the shifts in Nat-gas future (Nymex Henry Hub) in $/mmbtu during December 2-6. 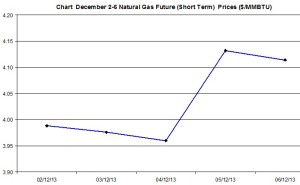 As you can see in the chart above, the natural gas price (Henry Hub future rate) sharply rose mainly on Thursday. 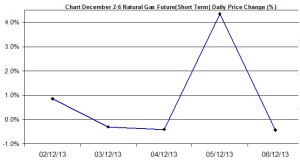 The current forecasts are that the temperatures will remain lower than normal levels mainly in the Northeast but will reach higher than normal temperatures in the South East and the West Coast. Considering the expected low temperatures for the season, the demand for natural gas in the residential/commercial sector in the Northeast is likely to further rise in the near future. But the normal or above normal temperatures in other regions could curb down the recent rally. Moreover, the heating degrees days are estimated to be lower than normal but much higher than last year’s. These factors could also curb down the recent rally of natural gas prices.