Natural gas spot price remained nearly unchanged during last week, after they had rallied a week earlier. The extraction of natural gas from storage continues to rise, but at the current rate it seems the storage levels will continue to be much higher than in recent years. This could mean natural gas prices will resume their decline in the upcoming weeks.

Here is a summary of the recent U.S natural gas market info collected by the EIA for the week ending on February 17th:

The decrease in storage was primarily due to a 97 Bcf extraction from the Eastern region natural gas storage.

In the following chart are the developments of natural gas storage (weekly figures) and Henry Hub natural gas prices between 2009 and 2012. During last week the Henry Hub spot price slightly rose by 0.4% to a weekly average price of $2.52/mmbtu. The Henry Hub price was $1.38/mmbtu below its price level the same week in 2011. 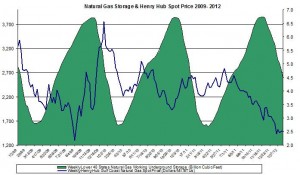 The Nymex Henry Hub Future (March delivery) sharply increased during last week by 8.06% and reached on Friday $2.68 /mmbtu; its average daily change was 1.64%, and its weekly average price was 1.69% above the previous week’s average price.

A detailed analysis of natural gas prices for the week of February 17th is herein.

← What Are the Potential Outcomes for Gold Price in 2012?
Gold and Oil Continued to Trade Up –Recap February 22 →