Natural gas prices didn’t do much during recent days as they have shifted from gains to losses with an unclear trend. Hurricane Isaac hasn’t seemed to affect the natural gas production in the Gulf of Mexico. The total demand edged up last week mainly due to the rise in the demand for power sector. The natural gas production declined while and rig count rose. The storage levels continue to rise and for the first time this season by a faster rate than last year. According to my rough guess at the current rate the storage will peak around November at 4,000.

Here is an analysis and short review of the recent developments in U.S natural gas market based on the EIA report for the week ending on August 24th:

The underground natural gas storage (Billion Cubic Feet) rose for the twenty-fourth consecutive week; last week the storage levels increased by 2% or by 66 Bcf – the largest injection in the past three months; the storage reached 3,374 billion cubic feet for all lower 48 states; the current storage is 12.0% above the 5-year average, and is also 14.6% above the storage during the same week in 2011 – these figures aren’t much different from last week. During the parallel week of August 2011 the NG injection was 55 Bcf and the five year average injection for the fourth week of August was 66 Bcf. This means the recent injection was very similar to past injections. Further, this is the first time the injection, after seventeen consecutive weeks, in which the injections were higher than the injection during the same week in 2011. According to my (very) crude estimates, if this trend will continue the storage level will peak around the middle of November at 4,000 Bcf, which is much higher than the storage level in 2011.

In the following chart are the weekly shifts in storage (and Henry Hub spot price between the years 2011 and 2012. The chart shows the recent decline in natural gas prices. All awhile the storage levels are stocking up at a slower pace than in recent years (up until last week).

During last week the Henry Hub spot price edged up by 0.7% to a weekly average price of $2.79/mmbtu. The Henry Hub price was still $1.22/mmbtu below its price during the same week in 2011. 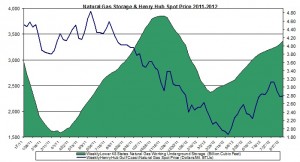 During last week the average U.S consumption, on a national level, edged up by 0.59% (W-over-W). The consumption was 1.5% higher than last year.

The gross production declined last week by 3.32% and was 0.77% below the production level in 2011. As a result, the total supply of natural gas declined by 2.84% during last week.

According to the report the natural gas rotary rig count rose by 2; by the end of last week the number of rigs reached 486.

On a national level, the U.S temperatures were 1.3 degrees cooler than the 30-year normal and 3.4 degrees cooler than last year. The slightly lower than normal weather is among the factors pulling down the demand for natural gas in certain sectors such as residential/commercial.