The prices of natural gas prices changed direction and rallied during most of the week; the publication of the recent EIA natural gas report didn’t seem to curb the decline in prices. The total NG demand bounced back mainly due to the sharp rise in the residential/commercial sector’s demand for natural gas due to Hurricane Sandy. The natural gas production rose again; rig count decreased. The storage levels increased again at a slower rate than in 2011 but at a faster pace than the 5-year average. According to my guess, at the current pace, the storage will still peak around mid-November at around 4,000.

Here is an analysis and short review of the recent changes in U.S natural gas market based on the EIA report for the week ending on October 12th:

The underground natural gas storage (Billion Cubic Feet) rose for the thirty-third consecutive week; last week the storage levels rose by 1.69% or by 65 Bcf; the storage reached 3,908 billion cubic feet for all lower 48 states; the current storage is 7.1% above the 5-year average, and is also 3.6% above the storage during the same week in 2011 – the gap between last year’s level and current level continues shrink while the gap between the 5-year average and the current level remains stable. During the same week in October 2011 the NG injection was 78 Bcf, and the five year average injection for the last week of October was 57 Bcf. Thus, the recent injection was higher than the past years’ average injections but remained lower than last year’s injection. According to my (very) crude estimate, if this trend will continue the storage level will peak around next month at nearly 4,000 Bcf, which will keep the 2012 storage levels  slightly higher the past storage levels.

The rise in storage was primarily due to a 34 Bcf injection from the Eastern consumption region storage.

In the following chart are the developments (based on weekly numbers) in storage (and Henry Hub spot price between the years 2011 and 2012. As seen, the price of natural gas has had an upward trend in recent weeks. All awhile the storage levels continue to rise at a slower rate than in previous years.

During last week, the Henry Hub spot price rose again by 3% to a weekly average price of $3.41/mmbtu. The Henry Hub price remained $0.21/mmbtu below its price during the same week in 2011. 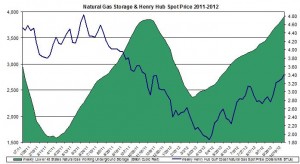 During last week, the average U.S consumption, on a national level, rose by 9.81% (W-over-W). The consumption was only 0.02% lower than last year.

The residential/commercial sector led the rise with a 34.79% gain. The price in consumption might have been due to the cold weather and heavy snow in the Mountain areas; the power sector’s consumption on the other hand decreased last week by 3.73% – probably due to power shortage in the Northeast as a result of Hurricane Sandy. Finally, Industrial sector’s demand rose last week by 3.22%. The total demand for gas was up by 9.09% than the previous week levels and was 0.5% above the same week in 2011.

The gross production increased last week by 1.16% and was 1.8% above the production level in 2011. As a result, the total supply of natural gas rose by 1.52% during last week.

According to the report the natural gas rotary rig count fell by 11; by the end of last week the number of rigs reached 416.