Natural gas (short term delivery) changed direction and rallied on the last couple of days of the week, after they had declined at the beginning of the week. According to the recent EIA report, the NG storage declined by 72 Bcf; this fall in the storage might have contributed to the rise in natural gas prices. During the previous week the Henry Hub future (short term delivery) rose by 0.52%.

Here is a short analysis of the recent developments in natural gas market for the week ending on December 28th 2012:

The Nymex Henry Hub Future (short term delivery) rose during last week by 0.52% and by Friday reached $3.45/mmbtu; its average daily change was 0.05%, its weekly average price was 0.98% above the previous average price.

The difference between the NG future and spot prices – future minus spot – remained in contango during the week. 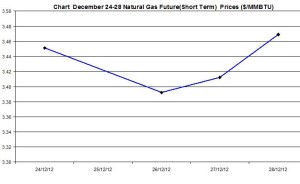 As seen in the chart herein, the NG prices (Henry Hub future and spot) increased during the last couple of days of the week.

In the second chart are the daily percent changes of the Henry Hub spot and Nymex Henry Hub future (short term delivery).  The chart presents the downward trend in the price of natural gas during the beginning of the week and shift back to the green. 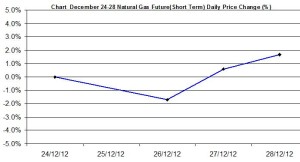 The underground natural gas storage (Billion Cubic Feet) declined during the previous week by 1.93% or by 72 Bcf; the storage reached 3,652 billion cubic feet for all lower 48 states; the current storage is 12.8% above the 5-year average, and 2.3% above the storage during the same week in 2011. During the same week in December 2011 the NG extraction was 81 Bcf, and the five year average extraction for the parallel week of December was 131 Bcf. This news is likely to further pull down the prices of natural gas. Based on past years, however, in the weeks to follow the extractions are likely to grow.

This week’s extraction was mostly from Eastern consumption region with 42 Bcf extraction. 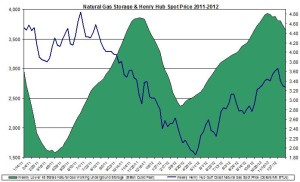 In the chart herein are the shifts (based on weekly numbers) in storage (and Henry Hub spot price in past years. As seen, the price of natural gas has slipped in recent weeks while the storage levels remained elevated.