Natural gas (short term delivery) changed direction and after it had increased in recent weeks, the price of natural gas tumbled down during last week as the weather became warmer in parts of the U.S. According to the recent EIA report, the NG storage slightly expanded; this shift from extraction to injection may have contributed to the tumble in natural gas prices. During last week the Henry Hub future (short term delivery) fell by 8.72%.

Here is a short analysis of the recent shifts in natural gas market for the week ending on November 30th 2012:

The Nymex Henry Hub Future (short term delivery) declined during last week by 8.72% and by Friday reached $3.56/mmbtu; its average daily change was -1.78%, its weekly average price was 3.89% below the previous average price.

The difference between the NG future and spot prices – future minus spot – was mostly in Backwardation during the week. 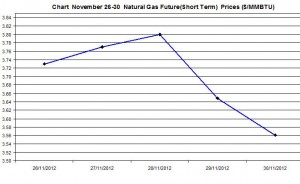 As seen in the chart above, the NG prices (Henry Hub future and spot) tumbled down mainly during the second part of the week.

In the second chart are the daily percent changes of the Henry Hub spot and Nymex Henry Hub future (short term delivery).  The chart shows the downward trend in the price of natural gas during most of last week. 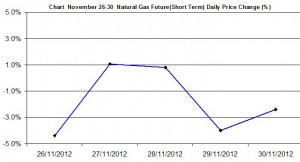 According to the recent EIA review on natural gas, the underground storage (Billion Cubic Feet) rose, after it had declined in the past couple of weeks, by 4 Bcf to 3,877 billion cubic feet for all lower 48 states; the NGs storage was 5.2% above the 5-year average, and only 0.7% above the storage level during the parallel week in 2011.

The recent NG storage weekly update as of November 23rd.