What is going on with natural gas? This energy commodity many had deemed to continue its collapse until it will reach the bottom price of $1.5 (my colleague even speculated it might even reach $1). But now it’s making a sudden recovery. Since April 20th the spot price of the Henry Hub rose by 25%!* So what is going up with this commodity and will this rally last? The short answers are nothing and no, respectively. In case I haven’t persuaded you here are the longer answers:

There are many who tried to explain the recent rally of natural gas prices or UNG:  Some might attribute this rally to the speculation of a warmer than normal weather in the U.S in this upcoming summer, other attributed this recovery to the decline in the U.S natural gas productions; others even suggested this is just a corrections to the sharp tumble of NG prices in the past several months.

The chart below presents the developments of NG prices (spot price and short term delivery future price) during April and May 2012. 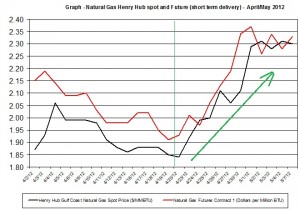 The question is moot because we might never know the exact answer and it could be an integration of several of the above or any other combination. If I would have to guess I suspect this recovery is mostly speculation driven based on the expectations the warmer than normal weather in the months to come might spike consumption.

But the more interesting question is will this rally hold up? I.e. will NG  resume their decline in the near future and thus erase its recent upward trend?

In regards to the fundamentals the  market hasn’t changed and doesn’t seem it will change in the near future.

One of the main factors to consider is that the storage is still very high, and even if the demand will continue to rise there is still a lot of natural gas to go around.

Since the storage levels are much higher than a year earlier there is no reason to assume there will be a shortage in natural gas that will sustain the recent rally in prices.

There are reports of a rise in NG usage of electricity in the U.S.  Furthermore according to the recent EIA report the demand for NG is picking up: The total demand for gas was 0.57% above the previous week’s levels and was 15.47% above the same week in 2011.

On the other hand the NG production is also up: The gross production rose last week by 0.14% and is 5.17% above the production level in 2011.

As of last week the underground storage rose by 28 Billion Cubic Feet and reached 2,576 billion cubic feet for all lower 48 states; the current storage is 49.9% above the 5-year average, and is also 48.4% above the storage during the same week in 2011. As a comparison, during the same week in April 2011 the total NG injection was 72 Bcf. This means that the current injection was very similar to the injection a year earlier.

The chart below shows the high levels of NG  this year compared with the levels recorded in the previous years. 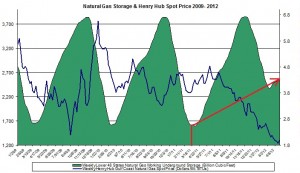 The chart also shows that during the months to come as storage will rise, prices tend to fall.

Therefore I suspect that the recent rally in prices won’t hold up and eventually the prices will resume their downward trend.

1 comment for “What’s Up with Natural Gas? In Short, Nothing Much”