The future price of natural gas (short term delivery) changed course and tumbled down on Thursday by nearly 7% after it had rallied at the beginning of the week. By the end of the week the Henry Hub future (short term delivery) fell by 2.67%. Based on the recent EIA natural gas storage report, the natural gas storage rose at a slower pace than the average five years did during the same week: The NG storage injection was 43 Bcf. In comparison, during the same week last year the injection was 28 Bcf.

Here is a short analysis of the recent developments in natural gas market for the week ending on May 3rd 2013:

The gap between the NG future and spot prices – future minus spot – moved between backwardation and Contango during last week.

The following charts present the shifts in Nat Gas future (Nymex Henry Hub) in $/mmbtu between April 29- May 3. 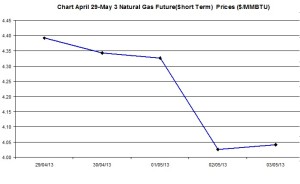 As seen in the chart herein, the NG prices (Henry Hub future and spot) fell on Thursday.

In the second chart are the daily percent changes of the Henry Hub spot and Nymex Henry Hub future (short term delivery). The chart shows the price movement of natural gas during the previous week. 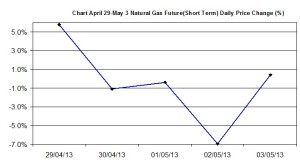 The underground natural gas storage (Billion Cubic Feet) rose again during last week by 2.48% or by 43 Bcf – a higher than anticipated rate; the storage reached 1,777 billion cubic feet for all lower 48 states; the current storage is 6.2% below the 5-year average and 30.9% below the storage during the same week in 2012. During the same week in April 2012 the natural gas injection was 28 Bcf, and the five year average injection from storage for the same week of April was 70 Bcf. This week’s injection was mostly driven from producing region with a 20 Bcf injection.