Here is a short analysis of the latest changes in natural gas market for the week ending on June 21st 2013:

During last week, the Nymex Henry Hub Future (short term delivery) fell by 2.68% and reached by Friday $3.77/mmbtu; its average daily change was 0.23%; its weekly average rate was 2.88% below last week’s average price.

The difference between the NG future and spot prices – future minus spot – shifted from Backwardation to Contango during recent weeks. 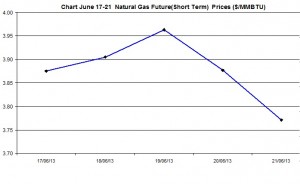 As seen in the chart above, the natural gas rate (Henry Hub future rate) changed direction and fell by the end of the week. 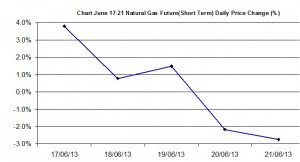