Natural gas market resumed their cool down as the short term future price of natural gas (June delivery) sharply declined during last week. By the end of last week, the Henry Hub future (short term delivery) plunged by 3.92%. Based on the recent EIA natural gas storage weekly update, the natural gas storage increased at a faster rate than the average five years did during the time frame: The NG storage injection was 111 Bcf. In comparison, during the same week last year the buildup was only 62 Bcf.

Here is a short analysis of the recent developments in natural gas market for the week ending on May 31st 2013:

The Nymex Henry Hub Future (short term delivery) tumbled down during last week by 3.92% and reached by Friday $3.83/mmbtu; its average daily change was -0.78%; its weekly average rate was also 4.71% below last week’s average price.

The gap between the NG future and spot prices – future minus spot – was mostly in Backwardation during the previous week. 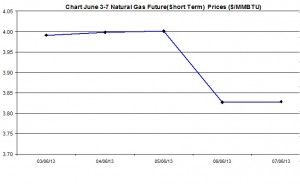 As seen in the chart herein, the natural gas price (Henry Hub future rate) sharply fell by the end of the week. 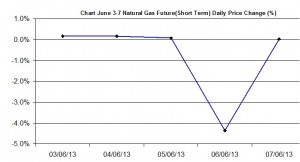