Natural gas (short term delivery) continued to trade up during most of last week.  According to the latest EIA natural gas storage report, the natural gas storage declined again by a faster rate than the average five years did: The NG storage withdrawal was 62 Bcf – less than half the extraction from the previous week; this withdrawal in the storage might have help keep natural gas prices from falling. During last week the Henry Hub future (short term delivery) increased again by 1.42%.

Here is a short analysis of the latest changes in natural gas market for the week ending on March 22nd 2013:

The gap between the NG future and spot prices – future minus spot – shifted from Contango to backwardation during said week. 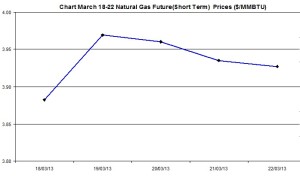 As seen in the chart above, the NG rates (Henry Hub future and spot) sharply rose again during last week.

In the second chart are the daily percent shifts of the Henry Hub spot and Nymex Henry Hub future (short term delivery). The chart presents the price fluctuations of natural gas during the previous week. 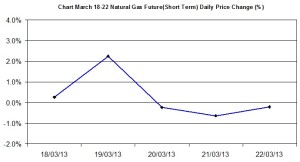 The underground natural gas storage (Billion Cubic Feet) declined again during last week by 3.2% or by 62 Bcf; the storage reached 1,876 billion cubic feet for all lower 48 states – the lowest level since May 2011; the current storage is 9.5% above the 5-year average but 21.1% below the storage during the same week in 2012. During the same week in March 2012 the NG injection was 11 Bcf, and the five year average extraction for the parallel week of March was 20 Bcf. This news is might keep natural gas prices rising. This week’s withdrawal was mostly driven from Eastern consumption region with a 47 Bcf extraction.