The future price of natural gas (short term delivery) continued to plunge during most of last week mainly at the beginning and the end of the week. By the end of the week the Henry Hub future (short term delivery) fell by 3.24%. According to the latest EIA natural gas storage report, the natural gas storage rose at a faster pace than the average five years did during the same week: The NG storage injection was 88 Bcf. In comparison, during the same week last year the injection was 30 Bcf; this injection in the storage.

Here is a short analysis of the recent developments in natural gas market for the week ending on May 10th 2013:

The difference between the NG future and spot prices – future minus spot – was mostly in Contango during last week.

The following charts present the developments in Nat Gas future (Nymex Henry Hub) in $/mmbtu between May 6-10.

As seen in the chart above, the NG prices (Henry Hub future and spot) declined during most of last week.

In the second chart are the daily percent shifts of the Henry Hub spot and Nymex Henry Hub future (short term delivery). The chart presents the price changes of natural gas during last week. 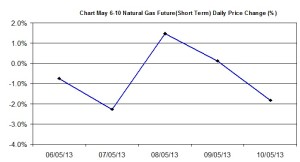 The underground natural gas storage (Billion Cubic Feet) increased again during last week by 4.95% or by 88 Bcf – an anticipated rate; the storage reached 1,865 billion cubic feet for all lower 48 states; the current storage is 5% below the 5-year average and 28.30% below the storage during the same week in 2012. During the same week in May 2012 the natural gas injection was 30 Bcf, and the five year average injection from storage for the same week of May was 69 Bcf. This week’s injection was mostly driven from Eastern consuming region with a 52 Bcf injection.