Natural gas (short term delivery) and spot price started off the week falling but by Thursday they have changed direction and rallied until the end of the week. Following these changes the difference between future and spot was in Contango throughout the week. The NG storage increased again at a slightly slower pace than in previous years.

During last week the Henry Hub spot decreased by 4.76%, and the future (October delivery) also fell by 1.7%.

Here is a short review for the recent changes in natural gas market for the week ending on September 21st 2012:

The Nymex Henry Hub Future (short term delivery) declined during last week by 1.7% and by Friday reached $2.89 /mmbtu; its average daily change was -0.31%, its weekly average price was 5.22% below the previous average price.

The Henry Hub spot also tumbled down during last week by 4.76%, and its average price was 3.68% below the previous average price.

The difference between the NG future and spot prices – future minus spot – was in Contango all through the week. 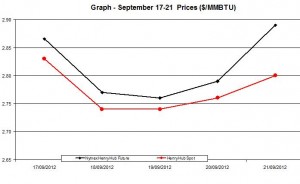 In the second chart are the daily percent changes of the Henry Hub spot and Nymex Henry Hub future (short term delivery). 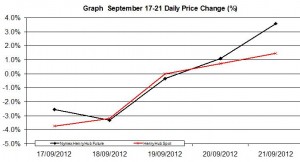 According to the latest EIA review on natural gas the underground storage (Billion Cubic Feet) rose by 67 Bcf to 3,496 billion cubic feet for all lower 48 states; the NGs storage was 8.6% above the 5-year average, and was also 10.1% above the storage level during the same week in 2011.

The recent NG storage weekly update as of September 14th.