Natural gas prices started off the week rising but this rally didn’t last long as Henry Hub future (July delivery) is currently tumbling down. Despite the warmer than normal weather that raised the consumption of Nat gas in residential/commercial sectors the total demand declined.  It was mainly due to the decline in demand for natural gas in the power sectors; the total supply also decreased mainly due to the decline in production and despite the rise in Canadian imports. The storage levels continue to rise even though at lower rate than a year earlier.

Here is an analysis and short review on the latest changes in U.S natural gas market based on the EIA update for the week ending on June 1st:

The underground natural gas storage (Billion Cubic Feet) increased again for the eleventh consecutive week; last week the storage levels rose by 2.2% or by 62 Bcf; the storage reached to 2,877 billion cubic feet for all lower 48 states; the current storage is 31.4% above the 5-year average, and is also 32.9% above the storage during the same week in 2011 – this is a decline in the levels of storage that were nearly the 35% mark last week. As a comparison, during the same week in June 2011 the total natural gas injection was 80 Bcf. This is the sixth consecutive week in which the injections are lower than the injection during the parallel week in 2011. If this trend will continue the storage level will peak by November at 3,900 Bcf, which is a normal storage level.

The increase in storage was primarily because of a 38 Bcf injection from the Eastern consumption region storage. 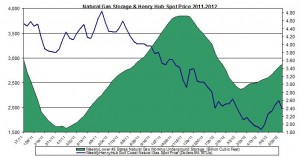 During last week the average U.S consumption, on a national level, declined by 2.76% (W-over-W).

The power sector led the fall with a 10.09% decrease. On the other hand all other sectors rose on a weekly scale. The total demand for gas is 2.41% below the previous week’s levels but is 5.85% above the same week in 2011.

The gross production declined last week by 1.33% but is 2.57% above the production level in 2011. As a result, the total supply of natural gas declined by 1.28% during last week.

According to the report the natural gas rotary rig count fell by 6; by the end of last week the number of rigs reached 588.