The Contango is still high and was on Friday $0.30 (future price (December delivery) minus spot price for Henry Hub). This should indicate that the market expects natural gas prices to change direction and start to rise, but this shift has didn’t occur up to now. By the end of the week the Henry Hub spot price reached $3.02/ MMbtu. The Nymex Henry Hub Future Price (December delivery) reached $3.32/ MMbtu. The high storage level of natural gas (see below) compared with the five year average might indicate a plethora of natural gas compared to recent years and thus could be among the factors to impede the expected growth in prices.

Here is a short review of the main changes in natural gas prices for the week ending on November 18th:

Nymex Henry Hub Future Price (December delivery) sharply fell during last week by 4.05% and reached on Friday $3.32/mmbtu; its average daily change was -1.48%, and its weekly average price was 7.57% below the previous week’s average price.

Natural gas spot price (Henry Hub) also sharply declined by 3.82% during the week, and its average price was 9.02% below last week’s average price. 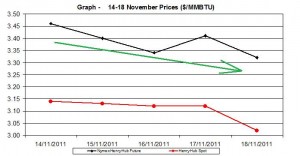 The chart shows the development of natural gas spot price and Henry Hub future price during last week: the Henry Hub prices had a downward trend during most of last week.

To sum up, natural gas storage increased while natural gas production and consumption declined during the week of November 11th.