Let’s examine the recent news that might affect the natural gas market for March 25th:

Today and tomorrow there will be an economic summit of all 27 Euro countries. The agenda for the summit will include how European Union banks will disclose their sovereign debt holdings as part of stress test; in the summit Ireland will seek a better deal for the 67.5 EUR billion in loans it received from EU and IMF.

Japan will need to increase its energy imports in the near future, and this could affect the energy commodities market. Obviously oil will be the prime import, however natural gas likely to be a major energy source, especially due to its low price.

Japan is the largest importer of liquefied natural gas. It’s not clear if Japan’s natural gas fields were damaged but since most of them are located in the west coast, and the tsunami attacked the east coast, this could mean the fields were less likely to be damaged. In order to cover the loss in the nuclear energy supply, Japan might fall back on natural gas to fill in the energy shortage.

The early estimates of Japan’s government in rebuilding the damage caused by the earthquake and tsunami attack are over 300 billion US dollars.  Up to now, Bank of Japan already stated it will pump an additional 15 trillion yen or about 183 billion US dollar: 5 billion yen were via the BOJ’s existing asset-purchasing program (quantitative easing plan) and 10 billion yen via a “funding supply” operation. If the estimates are correct, we might see additional funding plans to cover the natural disaster damage.

According to weather forecasts in the US there will be expected rain falls in the Midwest and the possibility of a few snow showers in the Northeast. This news might be drive natural gas spot price up as the today to close the week with a rise. Furthermore, this might also help further keep the contango low or even raise the Backwardation in Henry Hub prices as it did yesterday.

The backwardation (future prices of Henry Hub lower than the natural gas spot price) reached yesterday March 24th 0.02$/MMbtu. As we are exiting the winter and nearing the time of maturity of future April delivery, the backwardation will likely continue to rise. 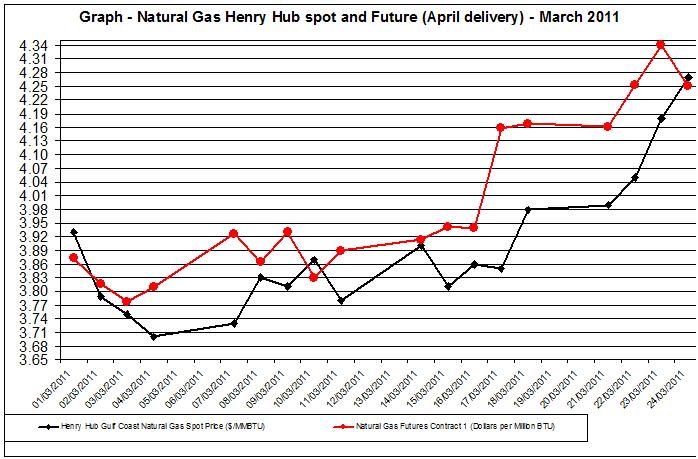 EIA recent report on natural gas market in the US

According to the recent EIA report the natural gas market is bouncing back as consumption is rising along with Henry Hub spot and future prices and US domestic production.

The rise in prices was suggests to be speculation around an increase in consumption of natural gas in the remaining days of March and early April. 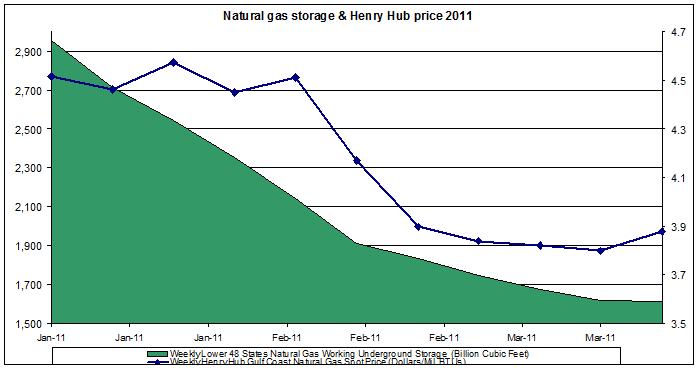 I still speculate that the Henry Hub natural gas price will further flctuatue with nodue to cold weather in the Northeast and Midwest but at a much more moderate rate than it did in recent days.

In the weeks to come, however the US’s rise in production and drop in imports because of it might further decrease the pressure for natural gas spot price to rise.

Here is a reminder of the top news that are scheduled for today and tomorrow that might after  the natural gas markets (all times GMT):

10.00 – Monetary developments in the euro area