Natural gas continued to trade down during most of last week and reached on Friday the lowest prices in over two weeks; the winter will probably set during the upcoming. This could help push up the prices of natural gas.

Let’s see what is up ahead for natural gas prices during the upcoming week of December 12th to December 16th:

The chart below demonstrates the development of Henry Hub spot and future (December delivery) prices during November. 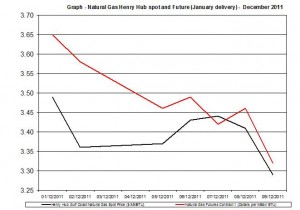 Snowy System in the South of the U.S.

According to the recent weather forecasts there are expected sown weather in South, but the weather is expected to be sunny with slightly warmer than normal temperatures in the Northeast – one of the prime consumers of natural gas among all U.S. regions. This means the demand for natural gas in the U.S. for heating purposes will start to rise but not substantially until the cold weather will reach the Northeast.

The natural gas market came down from the high levels of contango (the premium of Henry Hub future over spot prices) it had been a few weeks back; the Henry Hub even reached at one point last week Backwardation for the first time in over two months. If the natural gas market will remain in contango, this could be interpreted that the market expects natural gas prices to further incline (but at a slower pace than a few weeks back) during the weeks to come. The chart below shows the changes in contango/backwardation for the Henry Hub prices during December (until December 9th). 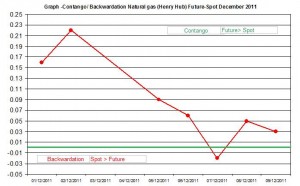 To sum up, natural gas consumption and imports increased while natural gas storage and production declined during the week of December 2nd.

The new report will be published on Thursday, December 15th.

Natural gas spot price continue its downward trend during last week and may continue to decline during the upcoming week as the cold weather is only reaching the South and not Northeast of the U.S. The recent decline in crude oil prices may also keep natural gas prices low.

I speculate the current natural gas prices will continue to decline and the future price will probably slip as well and further close the gap between future and spot prices; nevertheless. If the weather will get colder in the days to come the demand for natural gas will tend to rise and may even reverse the downward trend of natural gas prices.