Natural gas prices changed direction and rose during last week after they had sharply declined during most of the month. This recovery comes after oil prices remained at their same range during recent weeks. There weren’t major shifts in the fundamentals of the natural gas market so this rally might be short lived. After all the natural gas storage is still high: According to the recent NG storage report, there was a 36 bcf injection; the current natural gas storage is 55.4% above the 5-year average. This recent rise in natural gas prices might due to a combination of the upcoming expiry of future contracts and speculation. There are reports of rising speculations for a warmer than normal weather in the U.S that will raise the natural gas consumption for electricity.

Despite the sharp movement in natural gas prices, the gap between future and spot didn’t move much and remained in Contango; it reached a weekly average of $0.05/mmbtu.

Here is a short recap for the changes in natural gas market for the week ending on April 27th 2012:

The Nymex Henry Hub Future Price (May delivery) sharply rose during last week by 13.47% and reached on Friday $2.19 /mmbtu; its average daily change was -2.59%, and its weekly average price was 5.39% above the previous week’s average price.

The gap between the natural gas future and spot prices, i.e. future price minus spot price (if the spot are higher than the future its called Backwardation, if future is higher than its called Contango) remained in Contango during most of the week; by the end of the week the Contango reached $0.13/mmbtu. 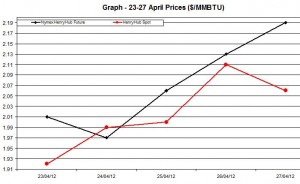 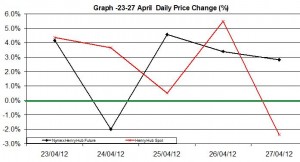