Natural gas spot price increased yesterday, mainly due to the cold weather in the US; Gold and silver prices continue to zigzag as they inclined yesterday; crude oil price fell after it inclined on Wednesday.

For now, one of the main news affecting the crude oil price, beside the cold weather in Europe and US, is the news from Egypt.

The Egyptian protests continue with the demand for President Hosni Mubarak to step down and not to resign after the elections in September.  This situation puts the region’s stability at a precipice from which there is only speculation if it will subside or escalate.

Mubarak talked on CNN and said he would like to resign now, however he is afraid that the riots will take over the nation and will cause a chaos if he will do so.

It seems that as the riots continue the chances for this attempted coup to resolve itself promptly decline and the human fatalities will only increase.

Crude oil prices might have a rally; however, if there won’t be any further escalation in the region, the price hike will subside, as it did yesterday.

Natural gas prices also increased yesterday as the blizzards continue attacking the many parts of the US, including the Northeast and Midwest.

Natural gas spot price (Henry Hub) inclined for the second straight day by 3.3%, as it reached 4.7$/mmbtu; this recent rise is mainly due to the extreme cold weather in the US continues, resulting in higher consumption for natural gas and heating oil.

The backwardation (the spread between the future and spot prices) for Henry Hub is currently -0.36$/mmbtu – the largest spread in several months. This could present an indication of the market expecting the price of natural gas to decline next month – upon the expiry of the March futures.

Gold price continues to zigzag, and after it moderately declined on Wednesday, it inclined yesterday by 1.57%, as it reached 1,353 $/t oz.

EURO/ USD declined yesterday by 1.28%, on the other hand, the USD weakened against the AUD, as the AUD/USD inclined by 0.51%. For a more detailed report on the EURO/USD check out Forex crunch.

A summary of yesterday’s Prices Changes:

The following table presents the main descriptive data from last business day – February 3rd, for precious metals, energy commodities and exchange rates. The table includes: settled prices, daily percent change, and quantitative change in US dollars (except for USD/CAD, in which the change is in Canadian dollars): 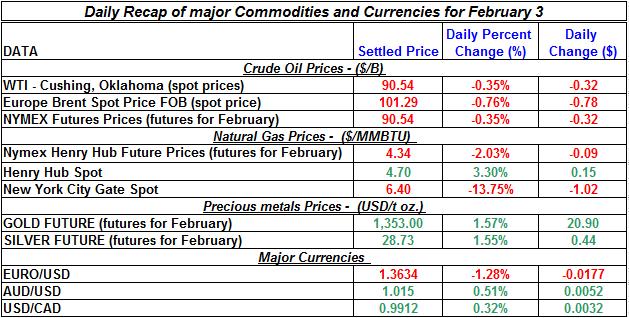