The natural gas market didn’t do much as the price of Henry Hub has slightly declined during the week. The recent decline in prices was partly due to the drop in demand for natural gas in the power sector and despite the sharp rise in demand in the Residential/industrial sector during last week; in total, the demand dropped last week; the supply also slightly contracted. Based on the EIA natural gas storage weekly update, natural gas storage buildup was only 46 Bcf, which was much lower than the five year average injection and last year’s injection.

Here is a short review of the recent changes in natural gas market for the week ending on September 20th 2013:

During last week, the Nymex Henry Hub Future (short term delivery) decreased by 1.36% and reached by Friday $3.687/mmbtu; its average daily change was 0.06%; its weekly average rate was 2.94% above last week’s average rate.

The spread between the NG future and spot prices – future minus spot – was mostly in Contango during the previous week.

The following charts show the developments in Nat-gas future (Nymex Henry Hub) in $/mmbtu during September 16-20. 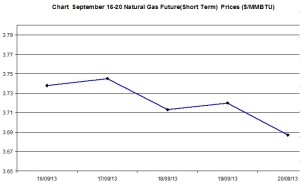 As seen in the chart herein, the natural gas price (Henry Hub future rate) has slowly declined during last week mostly at the last couple of days. 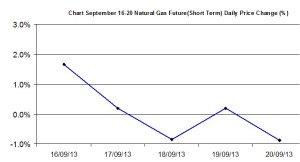