2010 is over and now we must start looking forward into 2011 and do some forecasts… Before we will put 2010 to rest, let’s shortly review some trends in 2010 regarding natural gas spot price, consumption and storage. This analysis could provide some perspicacity into what do we have to look for in 2011.

In the following natural gas price chart for 2010 is the average monthly prices that show the trend I’m referring to. 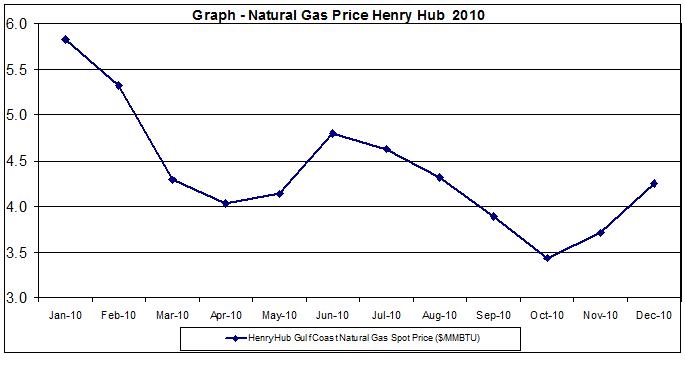 One way of explaining this downward trend is to check the natural gas supply and demand during 2010. 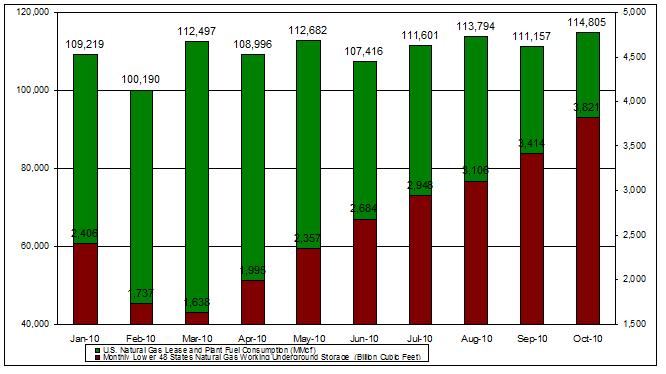 The table shows that the while the consumption level did fluctuate year round, it didn’t varied much as the difference between the high (October) and low (February) is 14%, however the natural gas storage has risen very sharply since March and reached 3,821(bcf) in October.

It seems that as natural gas storage rose, natural gas price fell because of the lower friction between demand and supply; as supply was abundant on the one hand, and demand while rising, didn’t rise substantially on the other, this could offer a sound explanation for the decline in natural gas spot price during most of the year. 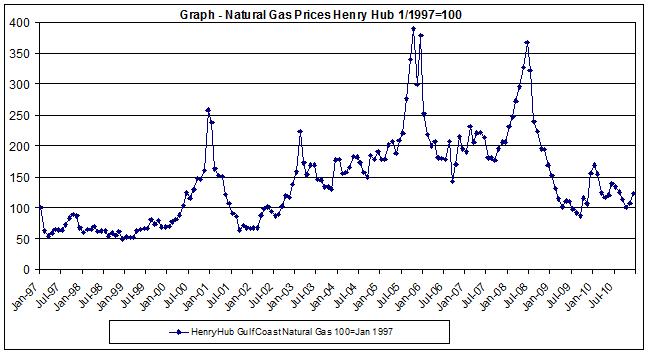 The chart shows that the price range during 2010 doesn’t seem high on an historic level. You can also see that there were several times in which natural gas spot price rose very substantially, and yet during does times it didn’t necessarily have anything to do with the natural gas market per say and more to do with speculation around adjacent markets, e.g. during 2008 in which the crude oil market was gushing and petroleum prices were high, natural gas, an energy commodity related to oil (to some degree), peaked as you can in the graph above.

For one thing, seeing that the natural gas storage level is currently high in the U.S. it does reduces the friction between supply and demand and the pressure to a price hike decreases. Unless there will be another unexpected rise in consumption, there shouldn’t be much of a price rise in the near future.  Also consider that all the huge gas fields found in the U.S. in the last year, some estimate at 2,200 trillion cubic feet will help keep reducing the price of gas from rising.

As the year will progress, however, we will have to be vigilant to see how other markets, such as the oil market, could affect the natural gas, as it seems that they could have a much stronger and volatile effect on natural gas spot price than the actual shift in supply and demand for this energy commodity.