Natural gas spot price (Henry Hub) continued its upward trend and inclined during most of the week, while the Henry Hub future prices (short term) ended the week with sharp falls. There are still concerns that the tropical weather in the East Coast of the US will affect the natural gas production in the Gulf of Mexico; there were already reports of shutdowns;  in the mean time the natural gas consumption in the US has fallen due to the power shortage the weather has caused in parts of the East Coast.

By the end of the week, the Nymex Henry Hub Future Price (October delivery) ended the week at $3.92/ MMbtu, and the Henry Hub spot price ended at $3.96/ MMbtu.

Here is a short review of the main changes in natural gas prices for the week ending on September 9th:

Natural gas spot price (Henry Hub) increased during the week by 0.76% and reached on Friday $3.96/mmbtu; its average daily change was -0.96%, but its weekly average price was 1.42% below the previous week’s average price.

The Nymex Henry Hub Future Price (October delivery) slightly declined by 0.46% during the week, and its average price was 0.10% below last week’s average price.

The chart shows that natural gas spot price had an upward trend during most of the week, while the Henry Hub future price sharply rose on Thursday only to sharply fall the following day.

The second chart shows the daily percent changes of natural gas spot price (Henry Hub) started the week with sharp falls that continues to moderate rises throughout the week; Nymex Henry Hub future price rose during most of the week except on the last day when it decreased by 1.5%. 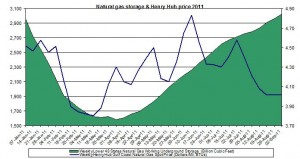 To sum up, natural gas storage inclined while natural gas imports, production and consumption fell during the week of September 2nd.