Natural gas prices (Henry Hub) changed direction from the downward trend they had been demonstrating in the past few weeks, and climb up during last week. The domestic demand of natural gas is still robust, despite its recent fall last week over the ease in natural gas consumption in the electric sector.  US natural gas production is still growing resulting in loosening the natural gas market in the US and keeping the Henry Hub spot price at a low rate. The Nymex Henry Hub Future Price (September delivery) ended the week on $4.06/ MMbtu.

Here is a short review of the main changes in natural gas prices for the week ending on August 12th:

Natural gas spot price (Henry Hub) increased during the week by 4% and reached on Friday $4.16/mmbtu; its average daily change was 0.8%, but its weekly average price was 3.28% below the previous week’s average price.

The Nymex Henry Hub Future Price (September delivery) also inclined by 0.60% during the week, but its average price was 1.01% below last week’s average price.

The chart shows natural gas prices had a general upward trend during most of the week.

The underground natural gas storage (Billion Cubic Feet) inclined by 25 Bcf to 2,783 billion cubic feet for all lower 48 states – the highest stock level since January 7th, 2011; the natural gas storage is still 2 6.6% below the storage level during the same week in 2010. 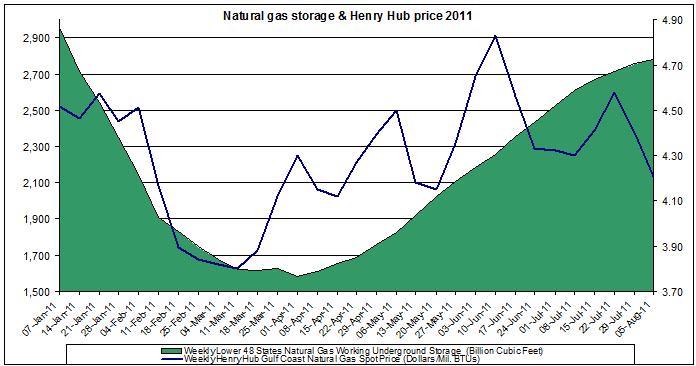 To sum up, natural gas storage and production inclined while natural gas prices, imports and consumption fell during the week of August 5th.