The rollercoaster in the natural gas market keeps traders and investors on their toes as the natural gas prices and consumption made a comeback and rose last week, probably due to colder than normal weather in the US.

Here’s a summary of the recent EIA report on U.S natural gas market for the week ending on April 15th:

The underground natural gas storage (Billion Cubic Feet) increased for the second straight week by 2.9%,; this was a 47 Bcf injection, and the total storage reached 1,654 billion cubic feet for all lower 48 states; the natural gas storage was 24 Bcf above the 5-year average.

This storage increase was mainly because of the injection of 29 Bcf from the Eastern Consuming Region natural gas storage.

The chart below shows the total natural gas storage (weekly figures) and Henry Hub spot price changes during 2011; notice that during this year the natural gas prices dropped during February and from mid March started to pick up again. 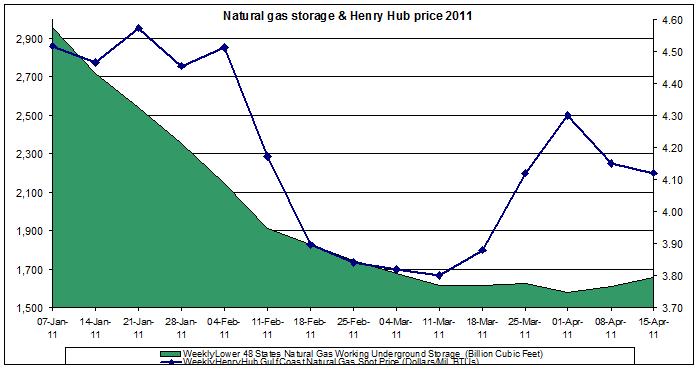 During 2011 (up to date), the weekly percent changes of these two data series have a 0.27 correlation, i.e. at 27% of the time as the storage levels dropped in a certain week the price also declined. During the same time last year, the correlation was -0.02.

U.S. natural gas consumption rose by 6% during the week, and the residential and commercial sectors’ consumption increased by 14.2%, mainly due to the colder than normal weather.

The production of natural gas moderately inclined and was 6% higher than the same week last year.

The imports of natural gas from Canada to the Midwest rose by 20% during the week compared to the previous week, however Canadian imports to the West region fell.

The weather in the US was warmer by 3.9 degrees than the season normal for the week ending on April 14th, and 0.9 degrees warmer than the same week last year, as the U.S. temperatures reached a weekly average of 55.6 degrees. Nonetheless, there were regional differences and in the regions where the weather was colder the effect that region had on the demand for natural gas was higher; most regions of the U.S. were warmer except for the Pacific Region which was colder by 5.3 degrees than its normal temperatures.

The Nymex Henry Hub Future Price (May delivery) rose by 2.24% during the week, but its average price was 0.04% below last week’s average price.

Natural gas spot price (Henry Hub) also increased from beginning to end of the week by 3.7% and reached 4.20$/mmbtu on Friday; Its average daily change was 0.73%, and its weekly average was 0.87% below the previous week’s average price.

A detailed analysis about natural gas spot price for the week of April 15th is herein.