The natural gas market continued to slowly recover this week as the price has slightly increased again mainly during the first part of the week. The moderate increase in prices was despite the decline in demand for natural gas in the power sector during last week; the demand for natural gas in the residential/commercial slightly decreased – the total demand fell; the supply inched down. Based on the EIA natural gas storage weekly report, natural gas storage buildup was 57 Bcf, which was close to the five year average injection and higher than last year’s injection.

Here is a short recap of the latest changes in natural gas market for the week ending on August 24th 2013:

During the previous week, the Nymex Henry Hub Future (short term delivery) increased by 3.47% and reached by Friday $3.49/mmbtu; its average daily change was 0.71%; its weekly average rate was 4.20% above last week’s average rate.

The gap between the NG future and spot prices – future minus spot – was mostly in Contango during last week. 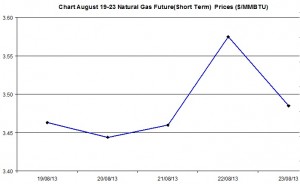 As seen in the chart herein, the natural gas price (Henry Hub future rate) rallied during most of last week until it fell down on Friday. 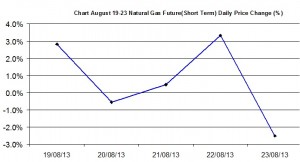