Natural gas (short term delivery) declined at the beginning of last week only to bounce back on Wednesday; the price of the Henry Hub fell by the end of the week.  The decline in natural gas prices was despite the recent storage report in which the natural gas storage decreased by a sharper pace than the average five years. According to the latest EIA report, the NG storage withdrawal was 194 Bcf; this withdrawal in the storage might have curbed the fall of natural gas prices. During the previous week the Henry Hub future (short term delivery) declined by 4.15%.

Here is a short analysis of the recent changes in natural gas market for the week ending on February 1st 2013:

The Nymex Henry Hub Future (short term delivery) fell during last week by 4.15% and by Friday reached $3.3/mmbtu; its average daily change was -0.81%; its weekly average price was 6.14% below last week’s average price.

The difference between the NG future and spot prices – future minus spot – was mostly in backwardation during last week. 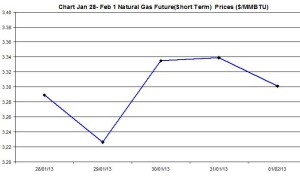 As seen in the chart herein, the NG prices (Henry Hub future and spot) tumbled down on the first day of the week.

In the second chart are the daily percent changes of the Henry Hub spot and Nymex Henry Hub future (short term delivery).  The chart presents the changes in the price fluctuations of natural gas during the week. 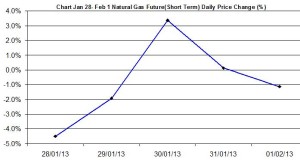 The underground natural gas storage (Billion Cubic Feet) fell during last week by 6.48% or by 194 Bcf; the storage reached 2,802 billion cubic feet for all lower 48 states; the current storage is 12.2% above the 5-year average, but 6.7% below the storage during the same week in 2012. During the same week in January 2012 the NG extraction was 132 Bcf, and the five year average extraction for the parallel week of January was 179 Bcf. This news is might curb the recent tumble in the prices of natural gas. On the other hand, in six to ten weeks the withdrawal season will end.

This week’s withdrawal was mostly driven from Eastern consumption region with an 129 Bcf extraction.