Crude oil prices inclined for the second straight day (third for Brent oil) after they had fell during most of last week. The shift might be related, in part, to the recent rise in the stock market, including the S&P500. It might also a correction to the recent falls in oil prices that seem to have been too sharp too fast. Crude oil prices are currently traded with moderate changes. Today, the U.S. retails sales report will be published. The American trade deficit inclined in June. The EIA natural gas report showed an increase in natural gas storage.

Here’s a short analysis and outlook of the crude oil market for today, August 12th:

The chart below presents the normalized prices of WTI spot oil and Brent oil during August (July 29th=100). 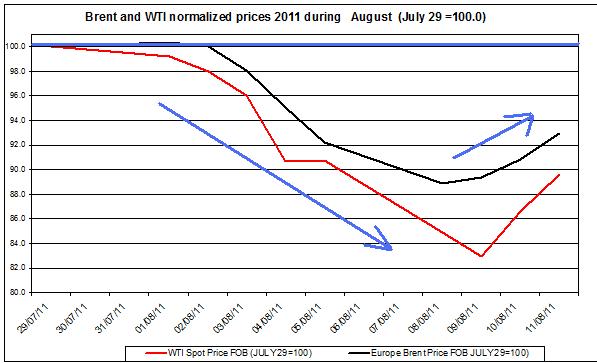 The premium of Brent oil over WTI spot oil declined again yesterday August 11th to $21.98/b; during August this premium rose by 8.54%, mainly because WTI spot oil price declined at a sharper rate than Brent oil price did. This finding suggests that the crude oil market in Europe is still tighter than in the US. 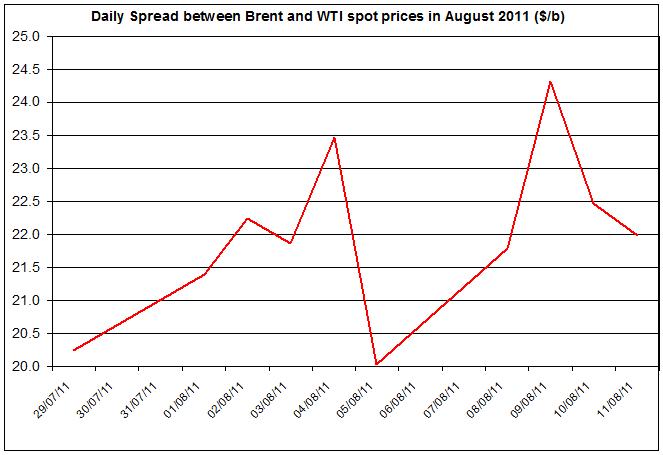 To sum up, natural gas storage and production inclined while natural gas prices, imports and consumption fell during the week of August 5th.

This finding suggests that the natural gas market is cooling down even though it benefited from the high oil prices and the recent heat wave in the US to keep its prices high.

Changes in US retail sales

This report will present the monthly changes in the retail sales and food services; in the precious report regarding June, the retail sales, when controlling for the price changes, slightly inclined by 0.1% from the previous month; retail sales were up 0.2% from May 2011; gasoline stations sales were slightly down by 1.2% in June compared to May 2011, but were 23.6% above sales in June 2010. This could serve as another indicator to the economic progress of the US.

The S&P500 along with other stock indexes bounced back yesterday if the stock market will resume its downward trend it may further pull down major energy commodities prices including crude oil prices. The correlation between oil prices and S&P500 isn’t reliable but in August so far it was strong; the chart below shows the price development of the S&P500 index with crude oil prices.

Crude oil prices have declined very sharply during most of August, but gained back some of the losses in recent days. There is still uncertainty in the financial markets that could spark an additional drop in stock markets that will affect crude oil prices to trade down as well. I speculate that crude oil prices will settle around the $80-$85 mark for WTI spot oil and $103-$107 for Brent oil.