The uprising in Egypt is all over the news as Mubarak stepped down from his presidency, yet the energy market didn’t react so far to the news other than continue its descent; thus, i.e. crude oil price fell last week.

Here is a weekly recap for February 7th to 11th on the main changes in crude oil price, recapping the highlights on petroleum stocks, production and consumption in the US, and the main news regarding the Egyptian riots and its effect on crude oil price:

After more than a couple of weeks of Egyptian riots, the coup has completed: on Friday, the former President of Egypt – Hosni Mubarak, stepped down from his presidency.

Mubarak gave in to the Egyptian people’s demand and relinquished his presidency to the army, according to the announcement given by his deputy Suleiman.

Up to now, however it seems that energy investors were more concern about the effect this news might have on the region’s stability than the actual Egyptian coup and its direct effect on crude oil market. This might explain why, despite the ongoing uncertainty in Egypt, the energy market didn’t change its downward trend (for more on the Egyptian turmoil and its effect on crude oil price, see here).

Let’s check how crude oil prices did this week:

NYMEX Futures Price (future for March) much like WTI spot price, fell by 2.17% from beginning to end of the week as it settled on 85.58 $/ on Friday – this week’s low.

These figures show crude oil prices continue the downward trend despite the uncertainty in the Middle East.

Europe Brent spot price, on the other hand, inclined by 0.97% from beginning to end of the week, and its average weekly price was 100.42$/b which is 0.1% above last week’s average.

The gap between the Brent and WTI spot prices was on Friday 14.82$/b – the highest gap all week. This news on Egypt might have a stronger effect on Brent oil than WTI oil. As the upcoming week will progress, we will see if there is a trend in closing the gap between the two spot prices. 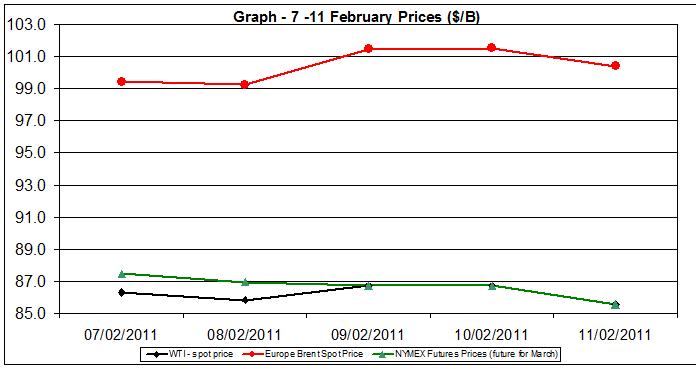 The chart above shows that while Brent price has no apparent trend (upward or downward) the WTI spot and future prices show a clear downward trend from the middle of the week. 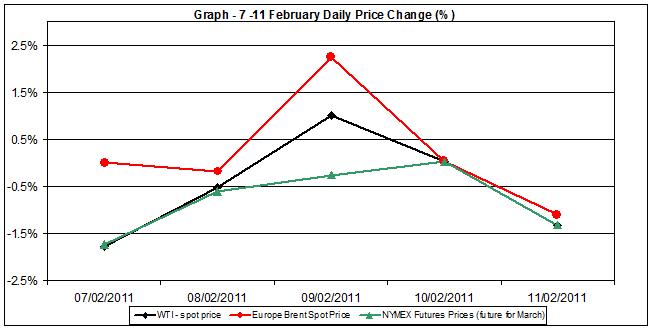 In my recent review on last week’s EIA report petroleum stocks, consumption and production in the US, showed that oil stocks have increased for the fifth straight week, as it rose by 0.2%, an increase of nearly 3.2 million barrels of crude oil to reach 1,804 million barrels – the highest level since December 17 2010.  .

The average US productions (million of barrels a day) was 5.423 on a four week average, higher than last week by 0.1%, however lower by 0.1% compare to the production for the same time last year;