Crude oil prices started off June with falls as they are currently traded down in the European markets.  What is up a head for crude oil prices by the end of the week? Let’s examine the crude oil market for today, June 2nd:

As seen in the chart below, following the rapid fall at the beginning of May of crude oil prices, they haven’t changed presented a clear trend and remained around the $100 per barrel for WTI and $115 per barrel for Brent oil. 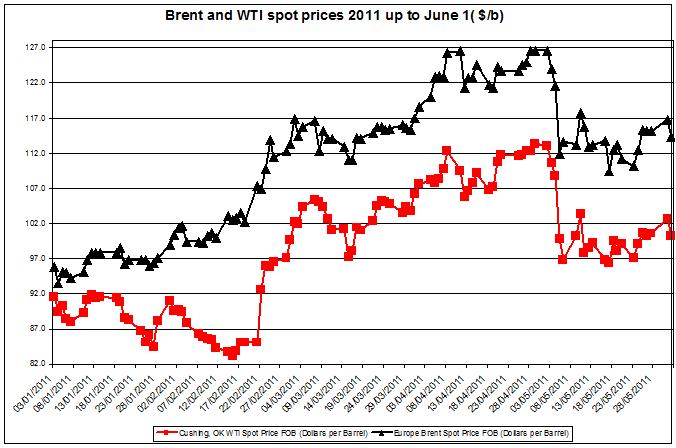 The premium of Brent oil over WTI didn’t change much and reached on Wednesday, June 1st 14.02$/b.

The chart below presents the changes of this premium during 2011. Despite the rapid changes during May, this gap remained around the $10 to $17 and also didn’t present a clear direction. 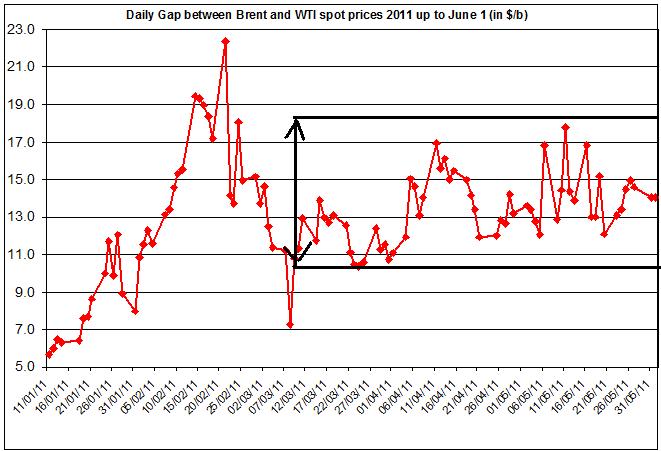 Yesterday, the US dollar strengthened against the Canadian dollar and the EURO by 0.92% and 0.47%, respectively.

This change coincides with the decline in crude oil prices yesterday.

If the US dollar will continue to strengthen against these currencies, this might further weaken the crude oil prices.

Yesterday, the U.S. ISM Manufacturing PMI for the month of May was published and reached 53.5%, which is a drop of 6.9 percent points compared with April 2011.

The US Energy Information Administration will publish today (instead of yesterday) its weekly report on U.S. petroleum stocks: Bloomberg estimates that U.S. oil stocks decreased by 1.8 million barrels during last week. In the previous report, U.S. Petroleum and oil stocks inclined during last week by 6.7 million barrels or by 0.38% (See here the recent petroleum report).

Major crude oil prices are currently traded down in the European markets:

Crude oil prices started June with moderate falls as they are currently also traded down.

Tomorrow, the US employment report will be published; it’s likely to show a slowdown in the growth in the payroll employment compared with previous months; this might curb the recent rally of US dollar and consequently might drive crude oil prices up. If so, there will likely to be a moderate rise by the weekend.

There are additional factors that might drive oil prices up, such as the feud between Saudi Arabia and Iran in the Persian Gulf.

That being said, these factors might have a lesser effect on crude oil prices as long as supply will keep with demand, and the demand seem to slow down. In the mean time, I still speculate that in the short term crude oil prices will remain at their current high prices around $100 per barrel for WTI and $110-$115 for Brent oil.