Crude oil prices are currently trading up, as they did yesterday. What is next for oil today?

During May 2011 the chart below of the WTI spot oil and Brent oil prices shows that these energy commodities prices didn’t change much and didn’t demonstrate a clear trend in recent weeks. 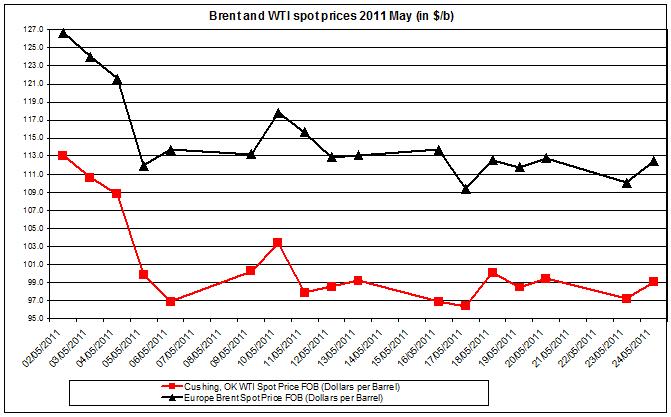 The premium of Brent oil over WTI: this gap reached on Tuesday, May 24th 13.33$/b. As seen in the chart below, during May, this premium’s variance inclined to 3.18 – the highest level since February. This shows that the premium varied during May more than in recent months. 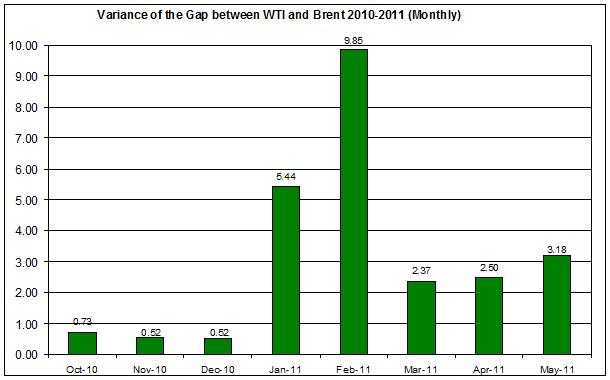 Euro to USD and crude oil prices during May

One of the strongest correlations between crude oil prices and major currencies remains between Euro to US dollar conversion rate and WTI spot oil prices, as seen in the chart below. 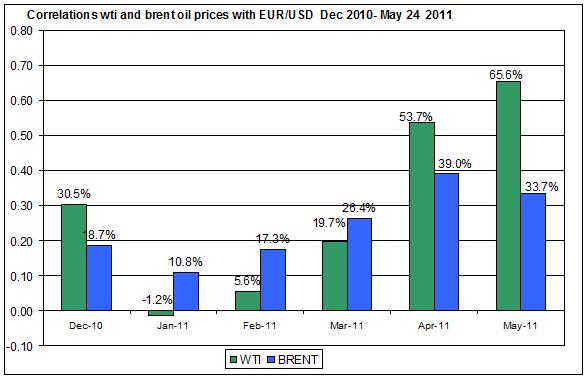 Yesterday, the Euro to US dollar conversion rate bounced back and inclined by 0.37% and reached 1.41.

This rise in the Euro to US dollar conversion rate coincides with the rises of crude oil prices yesterday and their linear correlation during May.

During May, Euro to US dollar conversion rate fell by 4.77%..

Bloomberg reports that Goldman Sachs and JP Morgan are go long on major commodities: Goldman Sachs increased its forecasts on crude oil (Brent) to 120$ for the next six months and to 130$ for the next 12 months. Morgan Stanly raised its estimates for 2011 by more 20% to 120$.

JP Morgan commodity analyst’s recommends that crude oil will lead the charge in the months to come.

These recommendations are probably among the reasons for the recent rally in crude oil prices in the last couple of days.

The debt crisis in Europe continues: according to Bloomberg, the Greek 10-year government bonds declined very sharply on May 20th and thus the speculation around Greece’s capability in returning its debt is high.

There are also speculations around Europe’s manufacturing growth rate as it is expected to slow down in May. This might suggest that Europe’s demand for crude oil for manufacturing purposes is falling.

For the recent news about Middle East see here.

Major crude oil prices are currently traded with moderate rises in the US markets:

Crude oil prices bounced back yesterday, but they continue to zigzag in as the market keeps on staying put at the current crude oil prices’ level.

I still speculate that in the short term all these concerns will continue to pull crude oil prices in different directions and eventually keep crude oil prices at their current high prices.

13.30 – US Department of Commerce – Report on Durable Goods