Crude oil prices didn’t change much yesterday, as they still seek direction. Today all eyes head towards Greece and the upcoming voting on the budget cuts. On the agenda today: the US consumer confidence report will be published; Libyan conflict updates; conflict between IEA and OPEC.

Here’s a short analysis of the crude oil market for today, June 28th: 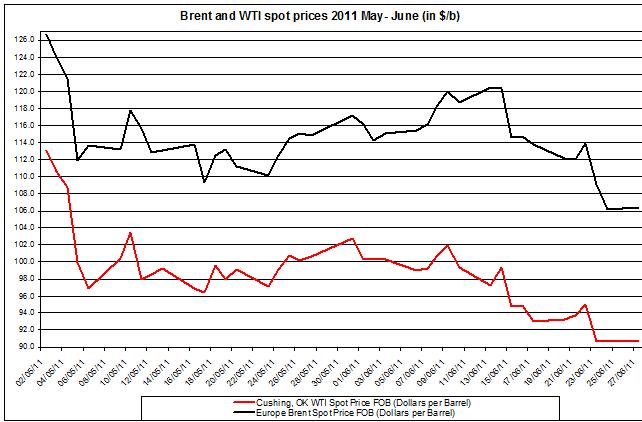 The premium of Brent oil over WTI spot oil bounced back and rose a bit after the sharp fall it had on Friday. 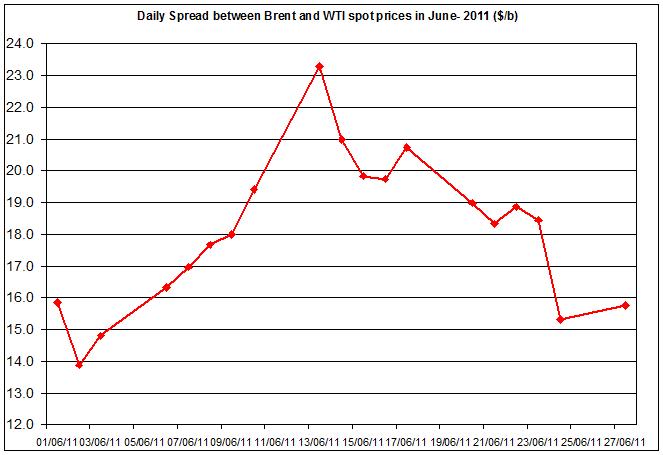 Following the spike in the premium of Brent oil over WTI on June 13th in which it reached $23.29/b, this premium deflated to similar levels it was back in the beginning of June.

Conflict between IEA and OPEC over release of oil reserves

Following last week’s announcement of IEA to release 60 million crude oil bbl from its strategic reserves in the upcoming month, it stir up the crude oil market and was probably among the factors to affect crude oil prices to trade down during last week. There currently calls from OPEC criticizing this move as OPEC’s secretary-general Abdalla El-Badri said:

“We see no reason for this release. I hope the IEA will refrain from using this practice. Stocks are supposed to be for emergency use only, not commercial activity.”

This oil release is the only the third one made by IEA in its 37 years of history.

The IEA’s concerns revolve the disagreement in the last OPEC meeting over raising quota on the one hand and the expected increase in oil demand over the summer on the other. This solution however is only temporal; if OPEC won’t reach an agreement over oil production quota, crude oil prices could shift direction and rise again.

Japan to increase its imports of natural gas and crude oil: according to recent news Japan’s Kyushu Electric Power Co will need roughly additional 4.4 million bbl of crude oil for the next three month in order to raise power output as the three of its nuclear power plants undergo maintenance and will remain closed.

The Greek debt news continue to stir up the financial markets as there is an expected vote today in its parliament to approve the major budget cuts proposed by Greece’s Prime Minister George Papandreou. Failure to pass this vote could result in the European Union not approving the recent bailout funds Greece needs to avoid default of its loans.

During recent months, there was a strong linear correlation between crude oil prices daily percent changes and Euros to US dollar exchange rate. 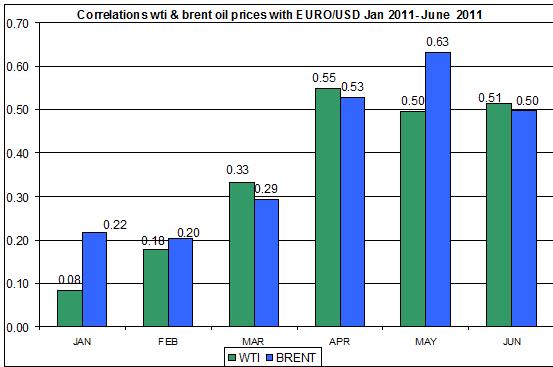 Major crude oil prices are currently traded up at the European markets:

The Greek debt will continue to affect Euros/USD and consequently might also affect crude oil prices; the news over IEA releasing 60 million bbl of crude oil might have brought down crude oil prices last week, but currently this affect is terminal; furthermore, crude oil prices might soon change direction as we are entering the summer in which the seasonal effect  will bring demand for oil up and might also hike crude oil prices again.