Crude oil prices finished yesterday with moderate falls following the moderate rises from Friday. During July crude oil prices (WTI spot oil) changed direction nine times over the past 11 business days.  The European summit on Thursday will be an attempt to resolve the Greek bailout. Today, the US building permits and US housing starts will be published; the Canadian bank will make its decision on the overnight rate.

Here’s a short analysis and outlook of the crude oil market for today, July 19th:

The chart below shows the changes of WTI spot oil and Brent oil price during July, in which they are both normalized to 100=30 of June. 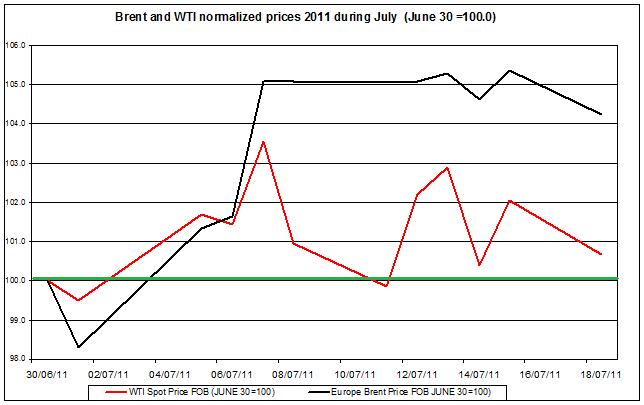 The premium of Brent oil over WTI spot oil continue to remain high as it reached on Monday July 18th $20.51/b; this gap rose by 24.98% during July, mainly because Brent oil price rose while WTI spot oil price nearly didn’t change. 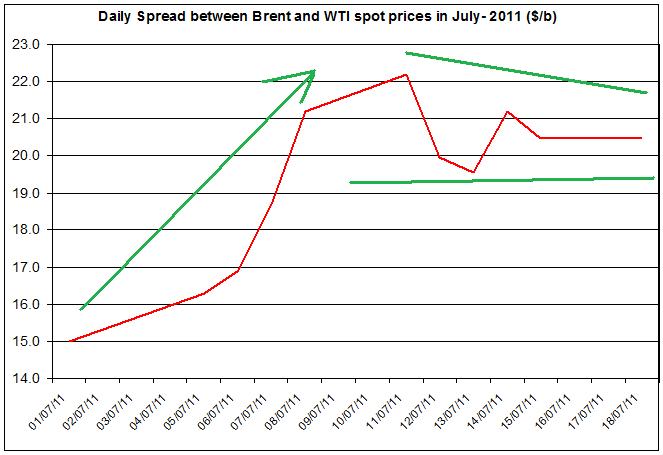 There is still a dispute between IEA and OPEC over the release of 60 million barrels the IEA decided to extract from its emergency reserves. By Saturday, major consuming countries of the IEA are expected to decide whether they wish to draw further from their stocks; OPEC continues to state that these releases are not necessary.

Following the recent OPEC June report, in which the oil production of OPEC slightly rose mainly on account of Saudi Arabia’s increase in oil production, there are speculations that several OPEC members consider to decrease their oil output to oppose the Saudi-Arabia raise in production.

The UAE expects to produce around 2.5 million barrels per day during July, a slight decrease from the 2.6 bbl/d output rate in June – its year’s high.

That being said, Saudi Arabia and UAE along with several other Gulf allies continue to say they will increase their oil output to meet oil demand.

Today the Canadian rate decision will be made; if the rate will rise, it may further weaken US dollar and consequently might further push up crude oil prices.

Major crude oil prices are currently traded up in the European markets:

Crude oil prices continue to zigzag, following their sharp rises at he beginning of July; there are still concerns from the supply side mainly in regards to the dispute between OPEC and IEA. This concern is likely to keep oil prices high; furthermore, the Monetary effect of the weak Euro and US dollar, are likely to also keep oil prices high. Finally, consider the expected seasonal effect from the demand side. Therefore, I still think that oil prices will remain at their current level and only zigzag during the day with no clear direction.