Crude oil prices finished yesterday with moderate rises following the moderate fall on Monday. Today, the US existing home sales will be published and the EIA petroleum market analysis report.

Here’s a short analysis and outlook of the crude oil market for today, July 20th:

Furthermore, WTI spot oil price shifted direction 10 times in July, which only shows how there is no clear direction for oil prices in recent weeks.

The chart below shows the changes of WTI spot oil and Brent oil price during July, in which they are both normalized to 100=30 of June. It shows that in recent weeks crude oil prices zigzagged with no clear trend. 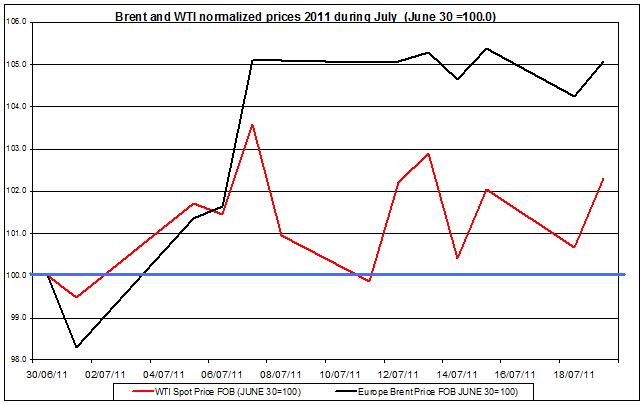 The premium of Brent oil over WTI spot oil continue to remain high as it reached on Tuesday July 19th $19.87/b; this gap rose by 21.08% during July, mainly because Brent oil price rose while WTI spot oil price nearly didn’t change. The chart below shows that in recent weeks this premium remained near the $20/b mark.

*These correlations are based on the research done by Roache et. al (2008) in the paper named “the effects of economic news on commodity prices: is gold just another commodity?”

During June, the EURO to US dollar, USD/CAD and AUD/USD were highly correlated with the daily percent changes of crude oil prices.

Major crude oil prices are currently traded up in the European markets:

Crude oil prices continue to zigzag, following their sharp rises at the beginning of July; the demand for oil should incline and push crude oil prices up; furthermore, the US dollar weakened yesterday over the US debt ceiling decision which should be made by August 2nd; finally, there are still concerns from the supply side mainly in regards to the dispute between OPEC and IEA.

Therefore, I still think that oil prices will remain high and might even moderately rise up during the day.