The biggest news today comes from the president of the United States about the US forces located and killed the known terrorist – Obama bin Laden, the financial markets reacted to the news with rises in major stock markets and current oil prices are traded with falls.

Let’s examine the oil market for the first day of the week , May 2nd:

During the month of April the WTI spot oil inclined by 5.9%, and Brent oil price increased by 6.3% as presented in the chart below. 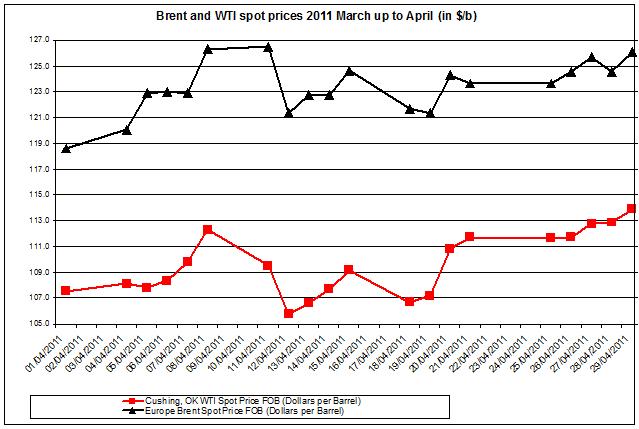 Bin Laden was killed by US forces

The biggest news today comes from the US president – Barack Obama who announced to the world that the US forces located and killed the known terrorist Osama Bin Laden.

The known terrorist was located in Pakistan.

You can see here the announced of Barack Obama.

This news might have affected the emotions of oil traders in believing that the uncertainty around terror attacks will decline; in any case, if there is any connection between the bin Laden news and the recent falls in oil prices,  i think it will probably dissipate very quickly by the next news cycle.

During the weekend Gaddafi’s compound in Tripoli was bombed by NATO aircrafts. As a result of the air strike Gaddafi’s youngest son and three of his grandsons were killed, according to Libyan officials. Gaddafi wasn’t harmed from the recent attack.

Gaddafi’s forces continue to strike the rebels in Misrata.

The deal to end the current political crisis in Yemen between President Ali Abdullah Saleh and his opposition nearly collapsed.  There is still a deadlock in the negations about the departure of Saleh Presidency and the replacement.

Yemen isn’t major oil and gas producer as it only produced 286.5 thousand of barrels per day in 2009 and over half of it Yemen consumes, however Yemen is located near the Bab al Mandab – one of the most important strait in the world; it connects the Red sea to the Golf of Aden. This strait is pivotal for transport of commodities including oil. Therefore, unrest and instability in that region that could jeopardize the transport of major commodities or even impede them might have an effect on their prices.

According to Bloomberg, Syrian military continues to send armed vehicles and tanks to the southern city of Daraa in an attempt to slow down the protests against the Following the current regime run by current President of Syria Bashar al-Assad.

Bashar al-Assad replaced a few weeks ago the government in an attempt to curb the protestors with no success.

The UK, US and UN Human Rights Council all took steps against the current violence in Syria.

The week started off with major oil prices been traded in the European markets with moderate fall:

The recent decline in WTI oil price is probably driven by the recent news about Bin Laden and as such won’t hold much ground for a long time. Furthermore, I still think that crude oil prices will remain at a high level, but in the mid to long term will eventually come down, once the uncertainty around the supply of oil from the Middle East (mainly in Libya) will dissipate.

Spread between Brent oil and WTI spread: as of Friday, April 29th, the premium of Brent oil over WTI reached 12.13$/b.

The premium of Brent oil over WTI fluctuated during the last week between 11.5 and 13.5$/b. The journey the spread past during last month is evident in the chart below; It shows how the gap picked up at the beginning of the month and shifted direction in the second part of the month, and by the end it balanced out between the spread noted above. I still think that the premium might continue to moderately decline but will remain around a double figure gap ranging between 11 and 13 USD. 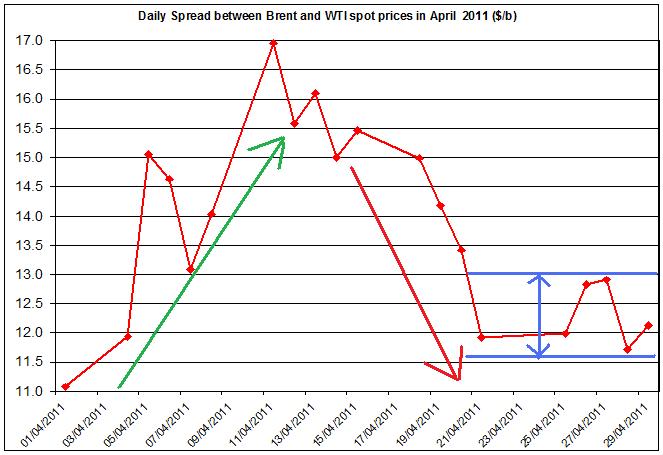