Following the declines in crude oil prices two weeks back, during last week oil prices (WTI spot oil, future and Brent oil) didn’t do much and ended the week at a similar level they have started off.

The turmoil in the Middle East is still present and keeps oil prices high around the 100$ mark, but there were probably additional factors that affected oil prices to change vary rapidly during May including the correlations with major currencies, and the news on the US and European economy.

See here for more elaborate analysis of the US dollar correlation with crude oil prices during May 2011.

The recent EIA petroleum report continues to show a slow down in the US oil market which might indicate a decrease in demand for crude oil.

Let review the changes from last week (May 9th to May 13th) vis-à-vis crude oil prices (Brent oil and WTI), and a summary of the recent EIA petroleum report:

Europe Brent spot oil price rose by 0.52% from beginning to end, and its average price decreased by 4.63% compared to previous week’s average.

The difference between the Brent and WTI spot prices reached on Friday 14.15$/b; the average premium didn’t change much (compared to the previous week) and reached 13.92$/b during the week with a standard deviation of 0.64$/b.

The graph shows that WTI and Brent spot oil prices didn’t show any upward or downward trend during the week. 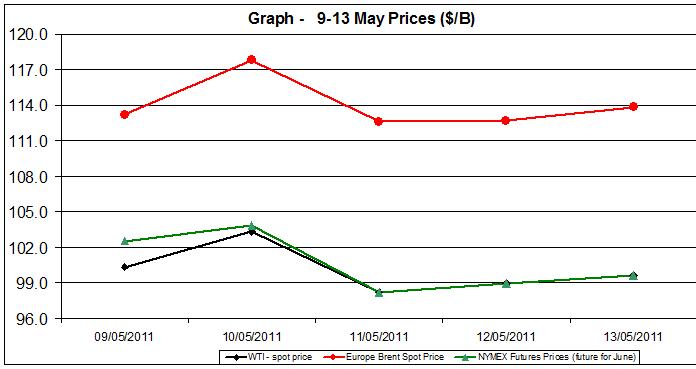 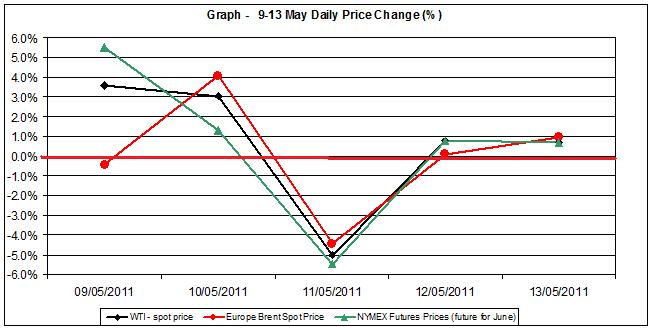 The graph shows that Brent and WTI spot oil had moderate changes during the week except on Wednesday May 11th when oil prices fell 4.4% up to 5.5%.

On last week’s published EIA report, about petroleum stocks, consumption and production: U.S. Petroleum and oil stocks keep on rising and during last week they inclined by 6.5 million barrels, a 0.36% increase compared to the previous week. For the week ending on May 6th the oil stocks reached 1,774.0 million barrels.

The graph below shows the petroleum and oil stocks levels compared to the WTI crude oil prices during January to May 2011. 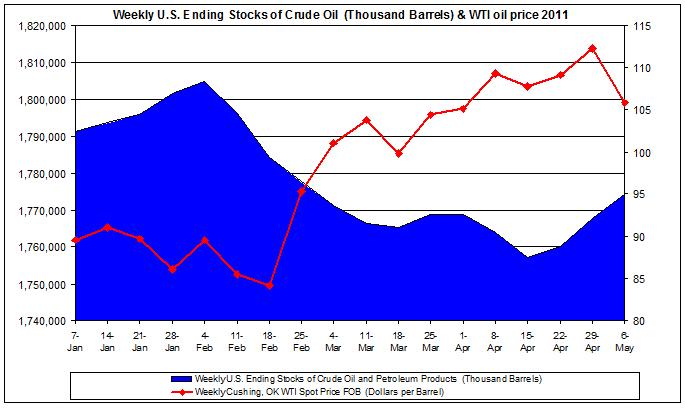 In total, during last week there were declines in US production, and rises in petroleum stocks, imports and refineries inputs.