Crude oil price (WTI) declined yesterday as part of the ongoing downward trend it experienced during2011. Let’s examine this behavior:

Yesterday crude oil price (WTI spot) fell for the third straight business day, by 0.58% as it settled on 84.32$/b – the lowest level since November 30th.

During the month of February, WTI spot prices declined by 5.8%, while Brent spot increased by 0.8%.

In the following graph are the changes in crude oil price (WTI and Brent) on a daily basis during 2011 up to date. 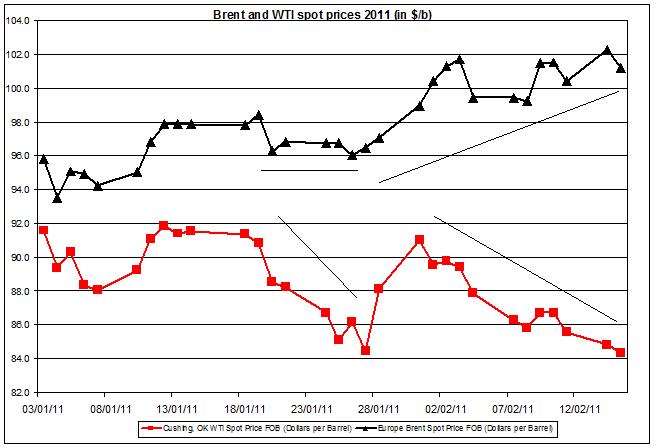 The graph clearly shows that Brent oil and WTI started January with similar fluctuations; however since the end of January Brent oil started to increase while WTI continued to plummet.

On the news today:

One of the main news that might affect crude oil price is the ongoing uprise in the Middle East.

In Egypt, following the successful coup of former President – Hosni Mubarak, the uncertainty in the regions is still high, even though the violent riots have subsided for now.

Since the Suez Canal, however, is open and there is no apparent cause for alarm that commodities will be held, there is little reason to be concerned about the news from Egypt affecting crude oil prices to rise.

The current speculation around crude oil prices is related to the expected EIA report on petroleum stocks: the recent downward trend in WTI and the rise in the spread between Brent oil and WTI might be because of the ongoing rise in US crude oil stockpiles in recent weeks: Cushing petroleum stocks inclined in the week ended Jan. 28 to the highest level since at least 2004, according to the Energy Department.

As the week will progress we will probably continue seeing this trend in which WTI prices are falling while Brent oil continue to show strength compare to WTI.