The news from Libya continues to show that the turmoil there is far from over, and it also puts risk on the near future of Libya’s oil production. There was also additional news related to crude oil, vis-à-vis USA and China.

Let’s examine the energy market, analyze the effects of the recent news from the Middle East on crude oil price and check back on the spread between Brent oil and WTI:

The fights in Libya continue, and there are reports of the rebels against the Qaddafi regime advance towards Sirte, which is 230 miles east of Tripoli, on the other hand Qaddafi’s troops are reported to recapture the oil town of Ras Lanuf.

Libya, a member in OPEC, holds the largest oil reserves in Africa with 44 billion barrels as of January 2010, is a major exporter of oil mainly to countries in Europe such as Italy, Germany and France.

The IEA claims that total crude production has dropped from 1.6 million barrels per day to 600,000. This is because almost all the international oil companies operating in Libya, which account for nearly 72% of Libya’s oil production, have reported partial or full shut-in of output.

OPEC members however, mainly Saudi Arabia, already stepped in and moved to compensate the loss in Libya’s oil production by increasing its oil production. In any case, there will be consequences to the oil market as analyzed by the EIA.

The recent labor report of the US, showed that the US economy is progressing however in a slower rate than expected and since the unimplemented only fell to 8.9%,  this puts some doubt on how well the stimulus plans (QE1 and QE2) of the Fed is doing in attempting to jumpstart the US economy. Of course these processes take time, and it’s hard to analyze while basing solely on a single month’s performance, and yet for the recent month there is little improvement. There might be some fallout from this report that might drive traders to commodities, including crude oil.

There are also reports of China’s government is trying to fight the current uprise in the inflation, which was targeted at 4% this year, and has passed it on January by a full one percent point, as the yearly inflation rate reached 4.9%. The inflation pressures is probably related to the recent rise in crude oil price, however if China will take steps ands reduce its consumption of energy, or fall back on cheaper energy products (coal), this might reduce the pressure of oil prices from further rising.

As the fights in Libya progress it remains to be one of the prime contributing factors traders keep close tabs since it could affect the fluctuations in crude oil price.

After Friday’s rises in crude oil price, there are speculations around how long will the Libyan uprise continue since it has been prolonging more than any other uprise that recently took place in other countries in the Middle East such as Egypt and Tunisia.

The markets might react accordingly and consider that these fights will continue to raise the uncertainty in the Middle East, and crude oil price might continue to rise if the turmoil will further escalate in the Middle East. Nevertheless, it could be that the oil market’s reaction is a bit more than the actual affect the Libyan turmoil has on the oil market. If this will be proven true, then oil prices will decline back as soon as the riots will end (providing of course there won’t be any other OPEC country facing rebellion acts by its citizens, wink wink Iran).

The gap between Brent oil and WTI: as of Friday, March 4th the spread between the two commodities’ prices declined to 11.3$/b – the smallest gap since the end of January. This might be because the turmoil in the Middle East starts to catch up with WTI oil price, nonetheless since the oil market in Europe is tighter than in the US, the turmoil in Libya might continue to have a stronger effect on Brent oil over WTI, resulting in the spread between the two commodities to remain. 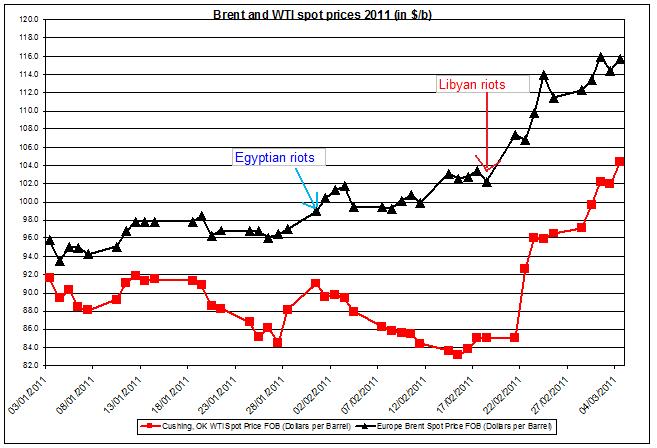 Here is a reminder of the top news that will be published today that might influence the markets (all times GMT):

13.15AM – Housing starts report in Canada