Here is a weekly report for the week ending on December 14th 2012 of the U.S oil and petroleum market: 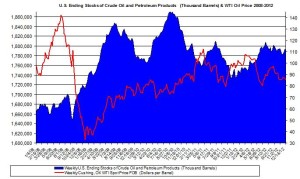 The chart above presents the shifts of petroleum and oil stockpiles and price of oil in the past few years. During recent years the lagged linear correlation between WTI oil price and current oil stockpiles reached -0.188. This mid-weak correlation postulates, assuming all things equal, the rates of oil may rally during next week.