Crude oil prices picked up again and rose during most of last week; despite the news a couple of weeks back about IEA releasing 60 million crude oil barrels from its oil reserves in the next month, its effect seems to have dissipated during the week. Crude oil prices were still lower than their prices at the beginning of June. The recent news from the US about the increase in home sales might have been among the factors to drive oil prices up at the middle of the week; on the other hand, the declining concerns over the Greek debt crisis, as the Greek parliament passed the budget cuts, resulting in the Euros to US dollar rising, might have consequently caused crude oil prices to finished the week with falls.

Let’s review the changes during last week (June 27th to July 1st) of crude oil prices (Brent oil and WTI), and present a summary of the recent EIA petroleum report:

Europe Brent spot oil price also rose by 6.51% from beginning to end, but its average price decreased by 0.6% compared with previous week’s average.

The difference between the Brent and WTI spot prices also fell sharply again and averaged at $15.78, and it finished the week at $16.44.

These findings suggest that as crude oil prices decline, the difference between the European market and the U.S. market as presented by the gap between Brent oil and WTI spot oil might start to close up.

The chart shows an upward trend for WTI and Brent spot oil prices mainly due to the sharp rise during the middle of the week. 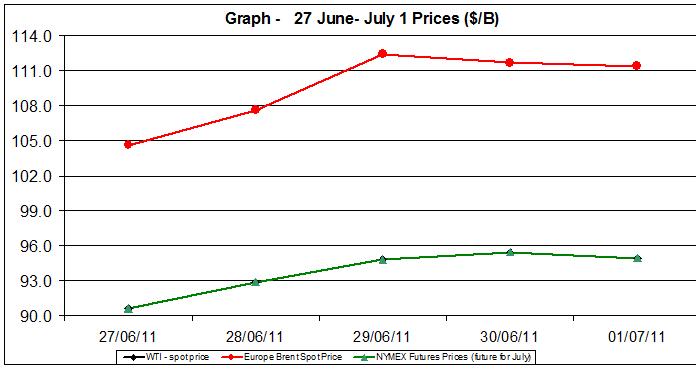 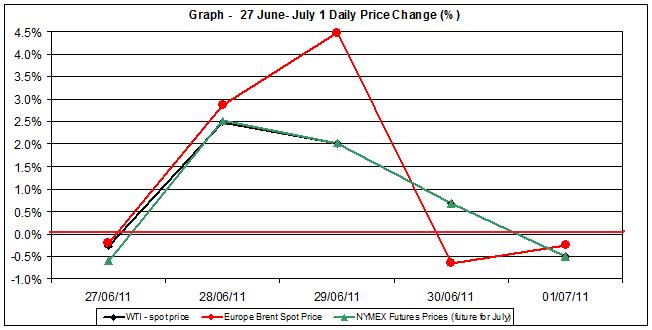 In last week’s EIA report about the US petroleum market, the U.S. Petroleum and oil stocks very moderately declined last week by 323 thousand barrels, or by 0.02%. For the week ending on June 24th crude oil stocks reached 1,791.6 million barrels.

The chart shows the ongoing downward trend of WTI oil price during recent weeks, while the petroleum and oil stocks have demonstrated a slow upward trend. 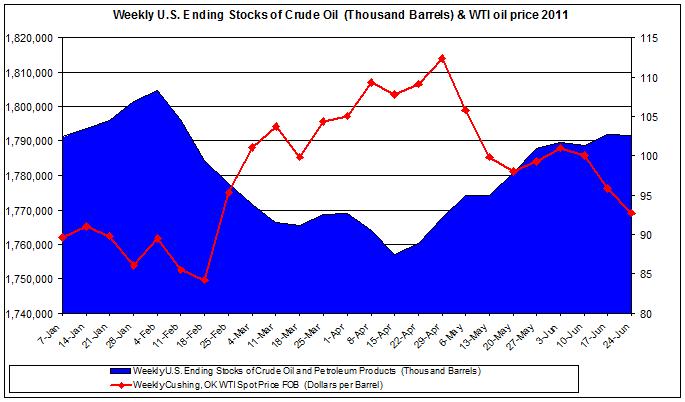