The week started off with moderate falls for crude oil prices, but this scenario is likely to change direction throughout the day as there are many news items that will pull oil prices to different directions.

Let’s examine the recent news related to the crude oil market for today, May 16th:

Last week ended with WTI crude oil prices moderately inclined by 0.69%; During May, up to Friday May 13th, WTI spot oil decreased by 12.1%;

The premium of Brent oil over WTI reached on Friday 14.15$/. 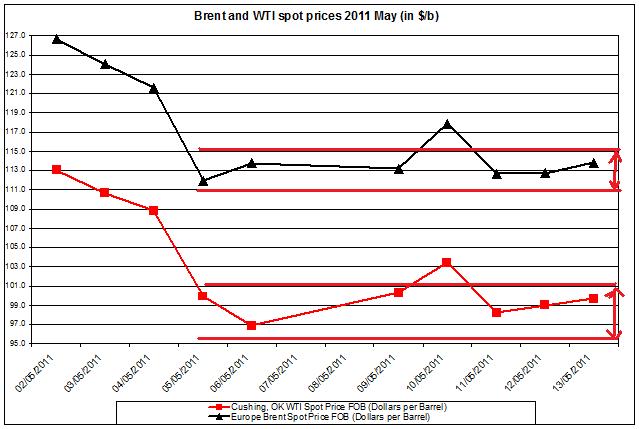 The chart above shows that expect on May 10th, crude oil prices ranged in the past couple of weeks within 4$.

Nonetheless, the rapid changes in crude oil prices during May reflects high volatility as seen in the chart below, the std. deviation  is currently twice as high as it was during April. 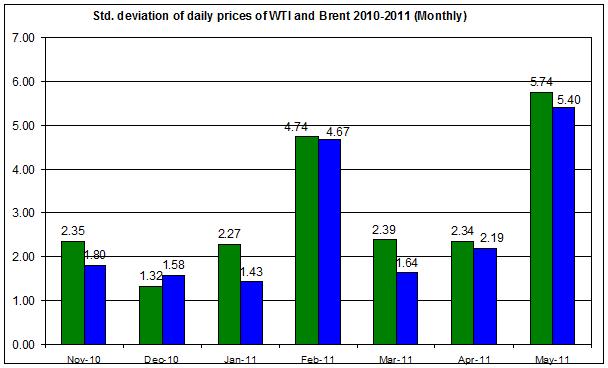 The rapid changes in oil prices during May didn’t diminish the correlation of WTI and Brent oil prices, which means despite the high uncertainty in the oil markets these two energy prices kept on moving in sync. 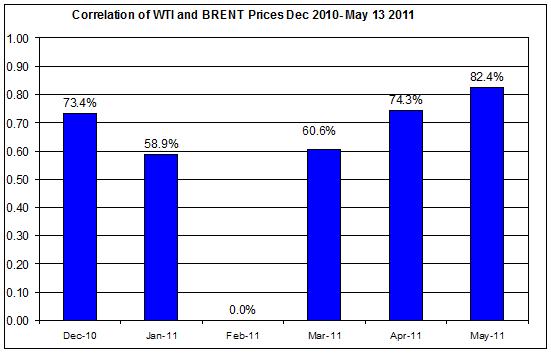 The US dollar and crude oil during May

During May, the daily changes in crude oil prices were stem, in part, from the changes in the US dollar compared to major currencies.

The chart below shows the strong correlation EURO//USD with crude oil prices including WTI spot oil and Brent oil. 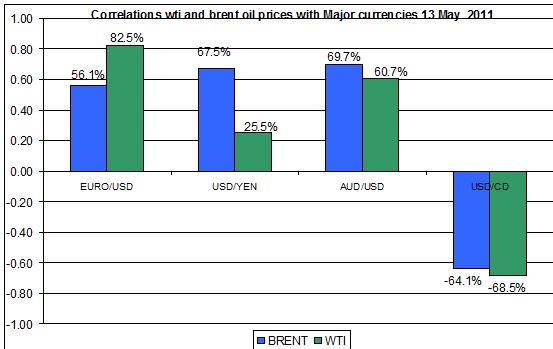 The uncertainty in the financial markets related to the directions of the US and European economies and speculations around their demand for major commodities are reflected in the major commodities prices including crude oil prices.

The concerns around the stability in the Middle East aren’t just because many of OPEC members are located there, but also because of its pivotal location for transport.

Libya – the turmoil and fighting between NATO forces and the rebels and Gaddafi’s forces continues with no clear end in sight. During the recent war in Libya, its oil production fell from 1.6 million bbl/d back in January 2011 to an estimated at 0.4 million bbl/d.

Yemen – The turmoil in Yemen is still far from over. There are still reports of confrontations between the military forces and protestors. Yemen controls the Bab al Mandab strait – one of the most important strait in the world; it connects the Red sea to the Golf of Aden. This strait is pivotal for transport of commodities including oil.

Israel – yesterday, there were reports of shooting incidents on the Israel/ Syrian boarder as dozens of Palestinians crossed it and entered to Majdal Shams in the Golan Heights.

Euro Area CPI – today, the core CPI will be published of the Euro Area for April 2011. The report is likely to show a rise in CPI mainly due to rising energy prices. This news might affect the Euro currency and consequentially the oil prices as seen above. The recent news related to the Q1 2011 GDP of Europe on Friday caused a sharp fall in the Euro/USD at the end of last week.

Obama takes steps to raise domestic oil output – According to Bloomberg, US president said he plans to fight the rising gasoline prices by stimulating the domestic oil production by encouraging oil drilling in Alaska.

Major crude oil prices started off the trading week with moderate falls in the European markets:

During last week crude oil prices had many shifts in direction but didn’t do much and remained around the 100$ mark for WTI spot oil and 110$ for Brent oil. There are two different forces that will likely to affect crude oil prices during the week: from the demand side – the speculation around the major economies’ including Europe and US; and from the supply side –the speculation around the oil market including the oil production of OEPC. These forces seem to pull oil prices in different directions: the demand pulls oil prices down, and supply pulls it up.

The uncertainty in the European demand also relates to its debt crisis and its effect on economic condition of Euro Area;  and from the US side,  the future steps that the Fed to consider as the Quantitative easing plan will end in June..