The Prices of crude oil sharply declined today as the recent partial EIA report presents the oil stockpiles remained unchanged in the U.S. The full petroleum and oil weekly report wasn’t published yet by the Energy Information Administration due to Hurricane. During last week U.S stockpiles remained virtually unchanged: the total U.S oil and petroleum stockpiles edged down by 0.1 million bl; conversely, crude oil stockpiles declined by 2 million bl. Currently, the price of oil is falling.

Here is a weekly update for the week ending on October 26th 2012 of the U.S oil and petroleum market:

In the chart below are the changes of petroleum and oil stockpiles and WTI crude oil price in recent years. During the last couple of years the lagged linear correlation between WTI oil price and current oil stockpiles was -0.188. This relation suggests, assuming all things equal, oil prices may further edge up during the upcoming week. 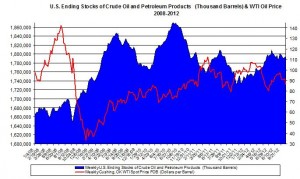 A detailed analysis of oil prices for the week ending on October 26th is herein.