There are many crystal balls that are sold on line that suppose to help us understand and maybe even predict commodities’ prices such as crude oil prices.

In a recent post I have written about the relationship between crude oil prices and natural gas prices. That post was triggered by an article I saw about the crude oil to natural gas ratio, which supposedly can help us make a prediction about one of these commodities. I also recall that article noting another ratio commonly used – the oil to gold ratio. A quick search on Google came up with nearly 4 million results of this term. One of the first results stated that there is normally a positive linear correlation between crude oil prices and gold prices. I have decided to check out this paradigm and see what kind of relationship there is between these two major commodities – gold and crude oil, and is it sensible to use this crude oil to gold ratio as a predicting tool.

To that end I have checked two basic facts: the trend of both of these commodities and the level of correlation between the two. 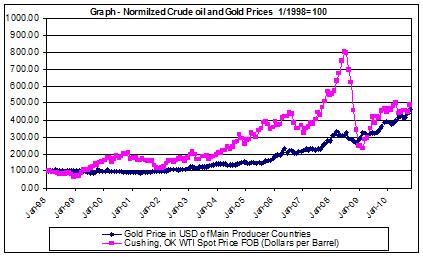 The graph appears to show some relationship between the two commodities’ prices. Nonetheless, since we all know that charts could be sometimes misleading I have also checked the correlation between the two series.

In the table below I have checked the level of correlation between the monthly percent changes (from month to month) of crude oil prices and gold prices. While for the entire period there seems to be a weak positive correlation, when breaking the time series to couple of years, a different picture reveals. In the table you can notice that in some periods there is a positive correlation (such in 2000-2001), while in other there is a negative correlation (such in 2009-2010). Also notice that the strength of the connection also varies between the periods, such is the case in 2006-2007 with a whopping +0.57 correlation. 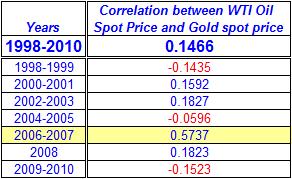 What does it all mean? For one thing, the correlation between the two commodities is not predictable and varies, that is the only prediction you can make based on this exercise. Further, (and much more obvious) there could be additional variables that affect these two commodities’ prices (i.e. interfering variables) in the same (or opposite) direction, such as the Quantitative Easing program from March 2009 of the Federal Reserve which apparently had a positive affect on these commodities’ prices.

In conclusion, we will need to search for better tools then some of the tools we currently have to understand the variability of major commodities, if there are any.

2 comments for “Tackling the oil to gold ratio paradigm – fact or fiction? A short analysis”