The highly anticipated announcement of the FOMC to launch QE3 was finally made a couple of weeks ago. As expected, on the day of the announcement the prices of gold rose. But since then, the price of gold remained nearly unchanged. The stocks of major gold producers such as Goldcorp Inc. (NYSE: GG) and Royal Gold, Inc. (NASDAQ: RGLD) continued to trade up but if the price of gold won’t resume its rally in the near future it could impede the progress of bullion producers. So will gold resume its upward trend in the near future? 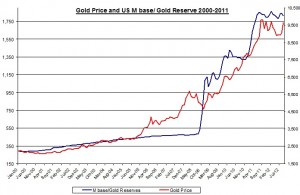 There could be a few reasons for this slow reaction in the bullion market:

QE1 and QE2 were completed and the US dollar is still strong. Despite the concerns of many traders and bullion investors that the Fed’s stimulus plan will crash the value of US dollar, such an event has yet to occur. The exchange rate of the US dollar with several other leading currencies isn’t much different today than it was before the 2008 global financial crisis: during September 2007 the Euro-USD was around 1.29-1.36. This rate is very similar to the current rate (Note: The Aussie dollar and Canadian dollar did appreciate against the USD however these currencies are strongly linked with commodities).

QE1 and QE2 didn’t seem to have a strong effect on the U.S economy. Despite the Fed’s efforts the U.S economy hasn’t shown much progress in recent years with unemployment around 8% and the manufacturing sector still contracting and U.S GDP growth around 1.7%.

Other central banks have also launched their own QE programs or similar stimulus programs. Not only the Fed tried to stimulate its economy, other central banks have also implemented their own stimulus plans. These banks include Bank of Japan, Bank of England and ECB to name a few. When every big economy “prints cash” or something equivalent (ECB offered loans to commercial banks and is expected to launch a bond purchase program to help Spain raise debt) then the potential adverse effect of the Fed on the USD may have diminished.

The price of gold rose during the last couple of weeks of August and the first week of September, after it hadn’t perform well during the previous months. During September the price of gold rose by 5.4%, SPDR Gold Shares (NYSEMKT: GLD) also rose by a similar rate of 4.7%. Major gold miners stocks also increased during the month: Royal Gold rose by 10.6%. Other bullion producers have also risen by similar rates: Yamana Gold, Inc. (NYSE: AUY) increased by 12.9%; Goldcorp Inc. (NYSE: GG), by 14.16%. The announcement of the Fed to launch QE3, in which the Federal Reserve will purchase each month $40 billion worth of mortgage backed securities helped rally not only the price of gold but also the stocks of the above-mentioned gold producers.

There is a strong and positive correlation between the changes of the gold producers’ stocks and the price of gold, e.g. during August and September the linear correlation between Royal Gold and gold was 0.62. This means, that under certain assumptions the changes in the price of gold could explain nearly 39% of the volatility of the Royal Gold’s stock.

As seen in the chart above, this correlation seems to hold up as the stock of Royal Gold hiked following September 13th – the day the FOMC announced its plan to launch QE3.  Other gold producers including Yamana and Goldcorp also have strong linear correlation with the price of gold.

At least, for holders of gold stocks there is the comfort of receiving dividend: currently, Royal Gold offered a yearly dividend of $0.6 which is nearly 0.62% yield; Yamana offered an annual yield of 1.39%; Goldcorp’s dividend represents a 1.2% yield.

The above-mentioned potential reasons for the delay in the rise of gold price could be a short term effect that will dissipate in the near future once the concerns for inflation will reignite and the desperation of the USD will continue. In the meantime, I suspect the price of gold will remain below the 1800s mark and this could also result in curbing the recent rally of bullion producers stocks.