Oil prices finished the week with moderate rises, however during the week they didn’t do much. The turmoil in the Middle East continues to escalate mainly in Libya, how this will affect the oil market for this week?

Let’s examine the main news for today, April 18th that might affect the crude oil markets:

During April, up to April 15th, WTI crude oil price crawled up as it moderately inclined by 2.0%, and Brent oil rose by 4.6%.  During last week, however crude oil prices didn’t do much as they have finished the week in a similar price level they have started the week. 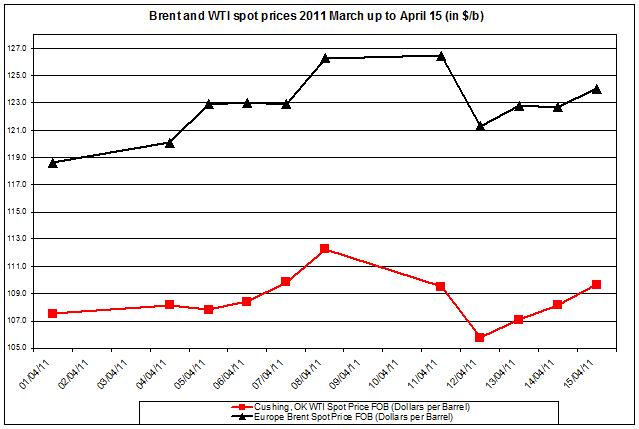 The Australian dollar continues to show a strong correlation between its daily percent changes and Brent and WTI oil prices daily percent changes. The correlation is stronger between WTI and AUD/USD than Brent oil, however since the U.S. only imports a fraction of its oil from Australia, this put into question if this correlation has any merit or might indicate of another interfering variable that connects the two series together. 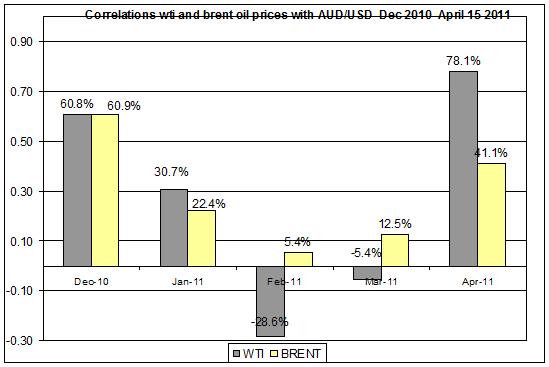 The recent news from Libya is that the rebels have managed to ward off Qaddafi’s forces from the city of Ajdabiya, in the central region of Libya.

In the mean time, Qaddafi’s forces keeps on bombing Misrata, which is the main rebel held city, in the western part of Libya.

According to the Spiegel , Germany has recently seized Libyan funds worth of over six billion USD. Germany representatives said that the UN could use these funds to assist the Libyan people in humanity assistance.

Bloomberg also reports of elections in Nigeria, and it appears that Jonathan is close to be re-elected as Nigeria’s president. The stability of Nigeria to U.S. is imperative, since Nigeria among the leading OPEC countries in exporting crude oil to the US with over 31,220 thousands of barrels during January 2011. During 2009, Nigeria’s oil production reached nearly 2.2 million bbl/d out of which 36% was exported to the U.S.

There are reports of over 62 tornados storms that attacked regions in North Carolina, U.S.A. These tornados are reported to be the deadliest since the tornados attacks of 1984. There are current reports of 45 fatalities. It’s not clear yet how these events will have an effect on the US economy and energy domestic energy market.

Major oil prices are currently traded in the European markets with moderate falls:

Last week’s “no trend” of oil prices might continue during this week as well because crude oil prices contain most of the high uncertainty in the oil market.  I speculate crude oil prices will remain high in the short run, but at some point they will have to come down, as the uncertainty around the supply of oil will dissipate.

Difference between Brent oil and WTI spread: as of Friday, April 15th, the premium of Brent oil over WTI declined to 14.40$/b – its smallest gap during last week.

As presented  in the chart below, the gap between Brent oil and WTI has an upward trend during April, even though the premium settled in the last few days around 14-16$.  I speculate that the premium will remain around the 14-16$ during the week. 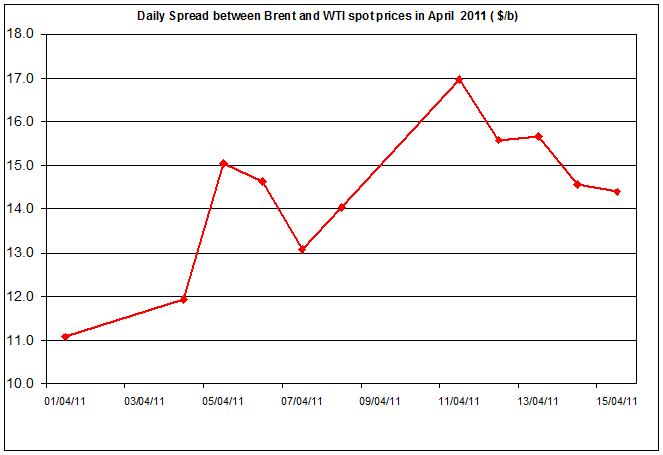